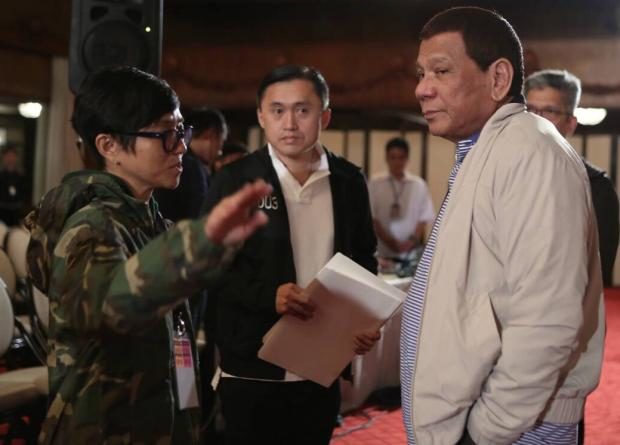 President Rodrigo Duterte talks with director Joyce Bernal during his rehearsal on Sunday, July 22, 2018, for his third Sona. as special assistant Christopher Go looks on. (Photo from Malacañang)

The House leadership rumpus spoiled what could have been the highlight of President Rodrigo Duterte’s third State of the Nation Address (Sona) – the signing of the Bangsamoro Organic Law (BOL) during his speech.

The Senate unanimously ratified the BOL on Monday but the House members adjourned their session early without ratifying the landmark measure.

Early Monday, Presidential Spokesperson Harry Roque said Duterte was supposed to sign the BOL but kept the anticipation by refusing to disclose where the President would sign it.

“Part of the excitement,” he told INQUIRER.net in a text message on Monday.

Roque said the President’s signing of the BOL was supposed to be Director Joyce Bernal’s “masterstroke” during the Sona.

“That was supposed to be director Joyce Bernal’s masterstroke in the Sona yesterday,” Roque told reporters at the Palace, referring to the the President stopping during his speech to sign the BOL.

Arroyo was eventually elected Speaker on Monday by 184 House members.

She is the 21st leader of the House of Representatives, and the first ex-President and woman to hold the post in the history of the country.   /kga