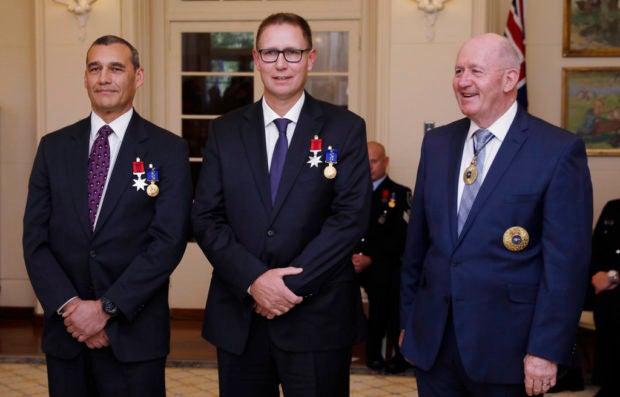 CANBERRA, Australia — A doctor awarded an Australian bravery medal for his pivotal work in the Thai cave rescue said he was most frightened by not knowing how much sedation to give to the weakened children.

Nine Australians involved in rescuing 12 boys and their 25 -year-old soccer coach were presented with medals at a ceremony Tuesday in the capital Canberra for putting their lives in danger during the treacherous ordeal.

Anesthetist Richard Harris and his dive buddy Craig Challen, a retired veterinarian, were awarded the Star of Courage, the second-highest civilian bravery decoration in the Australian honors system after the Cross of Valor. Six police and a navy diver received the lesser Bravery Medal.

Harris sedated the 13 before they began their journey out, fearing panic in the dark and confined cave system was a major threat to their survival.

Harris said on Tuesday he consulted with a range of specialist doctors in Thailand and Australia before deciding how much sedative to use.

“It was an estimate to start with and the first child was an experiment in a way and so it was a good guess with a lot advice from a lot of other specialists,” Harris told reporters after the ceremony at Government House.

“I’ve never done it in the back of a cave on malnourished, skinny, dehydrated Thai kids before so that for me was the most frightening part of the week,” Harris added.

Asked what would have been the consequences if he had got the sedation wrong, Harris told The AP: “A poorer outcome than we got.”

Rescuers feared a panicked boy could lose his diving mask and drown. Panic could also endanger the rescuers.

Challen said the first boy emerging from the cave alive gave him hope.

“The first boy came through and he was still alive and still breathing — that was one of the best moments,” Challen told reporters.

The boys and their coach entered the cave on June 23 for a quick exploration, but flooding quickly blocked the exit and they had to retreat deeper inside the cave. Heavy rains raised water levels further and thwarted the initial searches before two British divers on July 2 found the group huddled on a dry patch of ground, safe but hungry.

Harris and Challen arrived at the cave on July 6 and reached the team the next day.

“Dr. Harris conducted initial medical assessments and was able to provide information to the awaiting authorities regarding the safest extraction methods,” the citations said.

“The rescue mission was hazardous, with poor or zero visibility, debris and constrictive passageways, variable air quality, and made more difficult with further rainfalls predicted,” they added.

Harris sedated the boys and coach before they were taken out by divers over three days, concluding July 10.

Challen helped remove the team’s masks and wetsuits as the boys and coach were stretchered through dry places then he prepared them for their next dive through flooded sections of the cave, his citation said.

The other seven Australian divers displayed considerable bravery throughout the cave system helping move the team to the entrance, their citations said.

“The threat of sudden flooding, movement of debris and deterioration of air quality posed continuous, potentially fatal hazards to all personnel in the cave system,” their citations said.

The dangers were brought home by one death during the long rescue operation, former Thai navy SEAL Saman Gunan, who died while replenishing supplies inside the cave.

The 12 boys and coach recovered for a week in a hospital.

Prime Minister Malcolm Turnbull had nominated the nine for awards, which were fast-tracked because of public calls for official recognition of their role.

“You made us so proud. Selfless and courageous, superbly professional, competent. We could not have better ambassadors showing the best of our Australian values than you,” Turnbull told the award ceremony.

“It’s impossible to overstate how dangerous was your task,” he added. /ee

Read Next
Sona 2018 fashion trailblazers: Who gets your vote?
EDITORS' PICK
Vaccine supply is ‘biggest problem,’ Binay says after Duterte’s threat to arrest vaccine ‘skeptics’
WATCH: Undefeated Gilas Pilipinas leads latest Newsmakers
Piolo Pascual: The Ultimate Heartthrob continues to level up
Philippines to get more share of COVID-19 vaccine donation from US
Want to help local farmers? Shop small and eat Real Food
Pangilinan says science-based solution is needed vs COVID, not fear based or arrest
MOST READ
Duterte-Duterte tandem possible but ‘winnability is another question’ — Binay
Pangilinan says LP making efforts to reach out to Lacson, Isko, others
Little rest for the triumphant: Gilas plays China before flying out
After flying PAF jet, AFP chief vows more modern aircraft for PH defense
Don't miss out on the latest news and information.