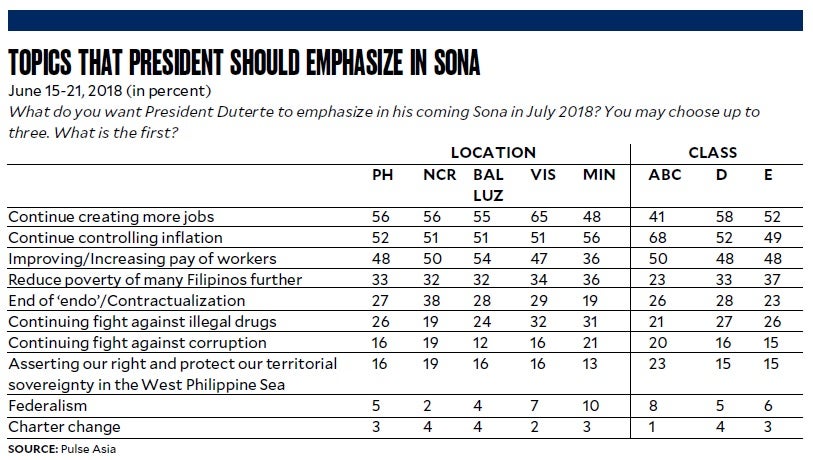 Creating more jobs and controlling inflation were the top issues that a majority of Filipinos would want President Rodrigo Duterte to focus on in his third State of the Nation Address (Sona), results of a nationwide survey conducted by Pulse Asia in June showed.

Eight in 10 adult Filipinos were found to be aware of the President’s previous Sonas, according to Pulse Asia.

Inflation rose by 5.2 percent year-on-year in June, the highest level in at least five years, making it more difficult for more families to make ends meet.

The unemployment rate in April stood at 5.5 percent, but underemployment remained high.

Aside from employment and inflation, other issues that Filipinos would like the President to discuss in his Sona included improving the pay of workers, reducing poverty incidence and ending contractualization, according to Pulse Asia.

The average daily wage of workers nationwide stood at P330.47 in April but due to inflation, its real value was just P208.38, according to the Associated Labor Unions-Trade Union Congress of the Philippines.

This was way below the P1,400 that the National Economic and Development Authority said a family of five would need daily to live a decent life.

Ending contractualization is one of the unfulfilled campaign promises of the President.

The President signed on May 1 Executive Order No. 51 prohibiting certain forms of short-term employment while allowing schemes, like seasonal or project-based jobs of janitors and maintenance workers, to continue.

The order reiterated existing policies on contracting, prompting the President to call on Congress to amend the Labor Code for more substantive changes.

Federalism and charter change, meanwhile, were the least priorities among the issues that Filipinos wanted the President to focus on in his Sona, according to Pulse Asia.

Results from the same survey showed that 67 percent of Filipinos opposed amending the Constitution now and 62 percent rejected a shift to federalism.

The survey also found that the most important accomplishments of the President and his administration since June 2016 were the anti-illegal drugs initiatives, fighting criminality, salary increase of police and soldiers, fighting graft and corruption, and free tuition in public universities and colleges.

A total of 4,354 people have been killed in police operations conducted nationwide from July 1, 2016, to June 30, according to the government’s monthly report on drug war.

But according to human rights groups, in the two years since the President declared his war on drugs, the death toll was around 23,000—mostly poor male breadwinners suspected of involvement in illegal drugs.

To boost the morale of the police and the military and enlist their support, the President raised the entry-level base pay of policemen, soldiers and other uniformed personnel from P14,834 a month to P29,668 in January.

On Sunday, the Philippine National Police announced a “significant decline” in the crime rate during the first two years of the Duterte administration, which it attributed to the success of the “war on drugs.”

The survey had a margin of error of plus-or-minus 2 percentage points for national data. —REPORTS FROM MARIELLE MEDINA AND KATHLEEN DE VILLA, INQUIRER RESEARCH; AND JAYMEE T. GAMIL