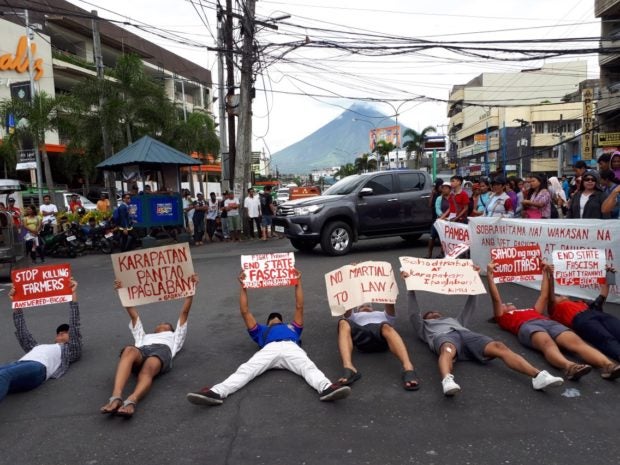 Militant group members carrying placards lay on their backs at the Pinaglabanan Shrine at downtown Legazpi City as protest against President Duterte’s leadership on his third State of the Nation Address (SONA). Photo Micheal B. Jaucian, Inquirer Southern Luzon

The group in Naga City marched from Peñafrancia church to Plaza Rizal while those in Legazpi City, Albay came from Daraga town.

The groups also demanded national minimum wage, land distribution for the farmers, and justice for the victims of extrajudicial killings in the government’s war against drugs in the rallies in both Bicol cities.

Ramon Rescovilla, secretary general of transport group Condor Piston Bicol, in his speech during the protest in Legazpi said that the jeepney phaseout is a burden for poor jeepney drivers and operators, robbing them of their livelihood while giving income to big companies producing the modernized jeepneys. 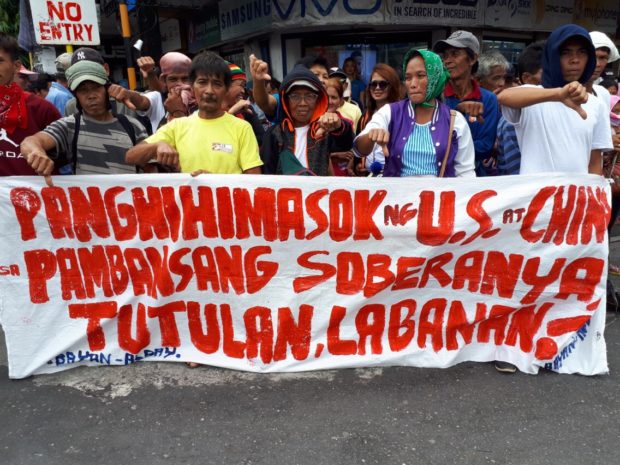 Protesters in Legazpi City give thumbs down to the Duterte administration to show their discontent. Photo Micheal B. Jaucian, Inquirer Southern Luzon

Before the rally ended, some of the participants lay down on the streets as expression of indignation against the Duterte administration.  /je