Sotto in fighting mood vs Con-ass; to stop session if pushed 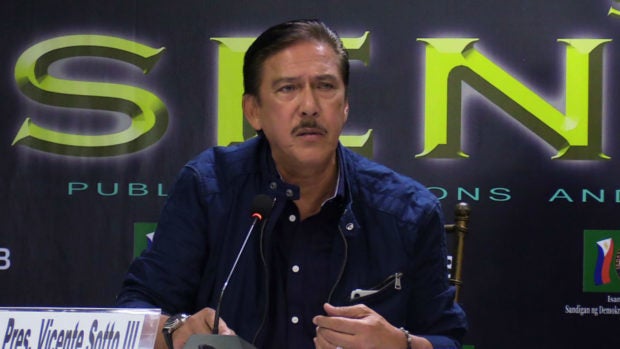 Senate President Vicente “Tito” Sotto III threatened to stop the joint session of Congress this Monday to quell any attempt to convene it as a Constituent Assembly (Con-ass).

Talks persist that the joint session at 4 pm could be used to constitute Congress as a Con-ass.

But Sotto immediately shot down the scenario.

“If you will notice, the resolution that we will be passing is to hear the address of the President. So there’s no other business that can be done there.”

“If ever that happens, I will adjourn the session on the part of the Senate,” he said.

Sotto said convening the Con-ass during the join session intended for the President’s state of the nation address was not unconstitutional but also illegal.

“As I said, ‘pag ginawa nila yun, i-adjourn ko ‘yung session on the part of the Senate and no one can stop me,” the Senate leader stressed. /cbb