President’s Sona to focus on people’s desire for change 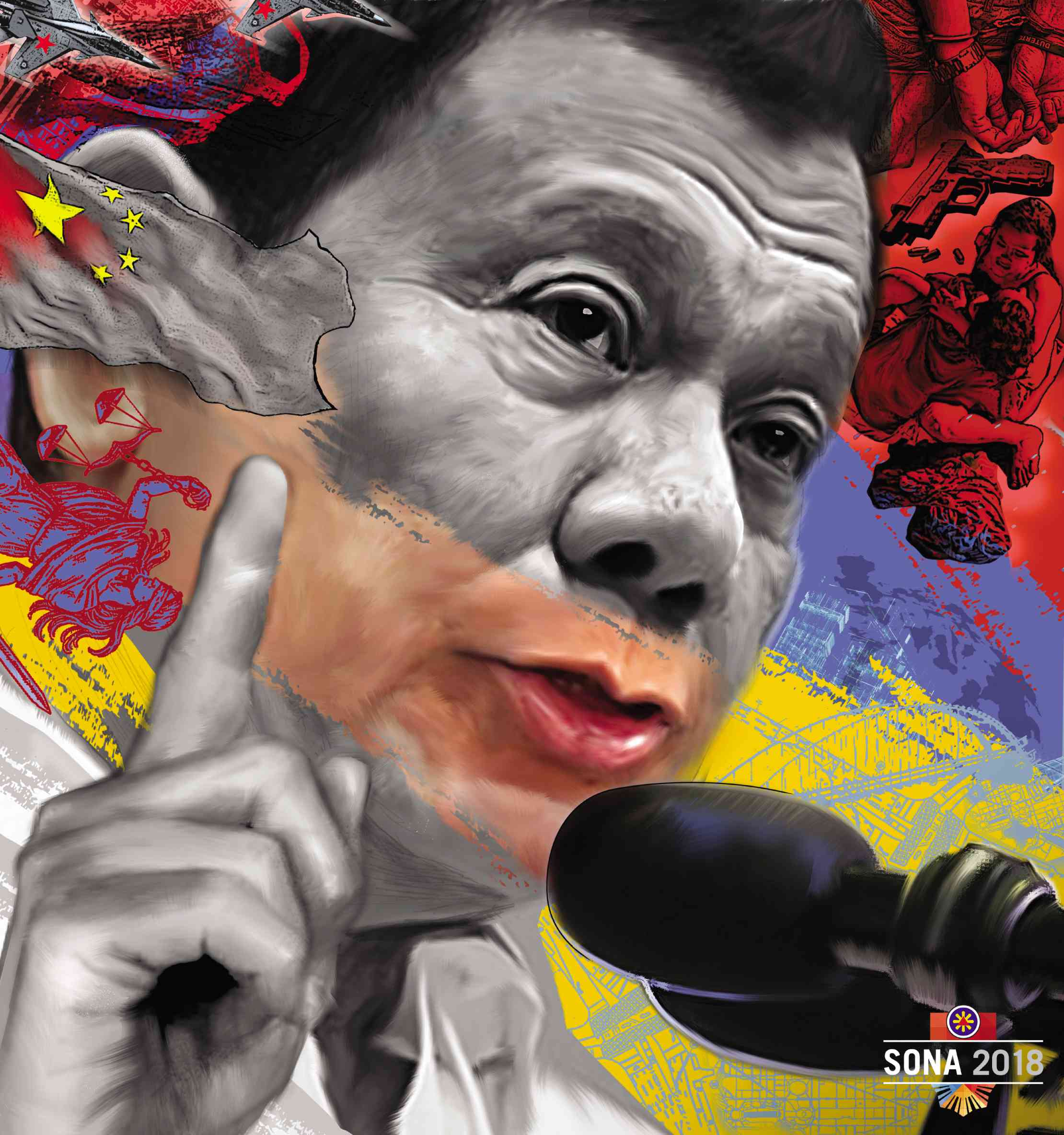 In a departure from his previous State of the Nation speeches, President Rodrigo Duterte will dwell not on his achievements but on his plans for the Philippines in the coming months when he addresses a joint session of Congress on Monday afternoon.

Presidential spokesperson Harry Roque said the President might also be expected to highlight his legislative priorities, including the proposed shift to federalism.

In a statement issued late on Saturday, Roque said this year’s State of the Nation Address (Sona) would be a continuation of the President’s two previous speeches and that he would articulate the “people’s desire for genuine and meaningful change” as the “father of the nation.”

He said that, traditionally, the Sona highlighted the government’s achievements in the past year.

This year’s Sona, however, “is all about the essentials on what [the President] intends to do in the next 12 months of his administration,” he said.

In a message to reporters on Sunday, Special Assistant to the President Christopher “Bong” Go said the President would speak about his accomplishments in the fight against drugs, crime and corruption.

“He will also be talking about the programs he has implemented, especially those that require a leader with the political will, since these are for the greatest good of the majority,” Go said.

On Saturday, Malacañang released a 68-page report on the Duterte administration’s accomplishments since July 2016.

Among the key accomplishments this year cited was the signing and implementation of the Tax Reform for Acceleration and Inclusion (TRAIN) Act, which raised the ceiling on tax-free income but imposed higher taxes on unnecessary goods and slapped an excise on oil products, which magnified the effects of world oil price spikes in recent months to push inflation to a five-year high of 5.2 percent in June.

Revenue from the TRAIN law will be used to fund free college education in state universities and colleges, universal health care, and the administration’s infrastructure program.

In the report, Malacañang commended the Department of Finance for collecting P2.251 trillion in 2017, the biggest in 10 years, representing 14.25 percent of gross domestic product.

In addition, the Palace cited the Department of Budget and Management (DBM) report that 90.6 percent of the P3.767-trillion budget for this year, or P3.414 trillion, had already been released as of end-June.

The President also signed the Ease of Doing Business Act, which reduces the number of days in processing permits and licenses for all business-related transactions, and a two-strike policy for government officials who fail to issue permits within the prescribed period.

Also cited in the DBM report was the remarkable improvement at Ninoy Aquino International Airport (Naia), which the Palace said was no longer considered one of the worst airports in the world.

Skytrax placed Naia 10th in Most Improved Airports in the World for 2018, the report said.

It listed the completion of several public infrastructure projects now accessible to the public, such as the widening of a 4.75-kilometer stretch of Radial Road 10 in Manila.

Earlier, the Department of Public Works and Highways said this project would reduce travel time between Manila and Navotas City from one hour to 30 minutes.

The report, however, did not mention the number of suspects killed during law enforcement operations.

Researchers from Ateneo de Manila University and De La Salle University have counted 5,021 killings since the President launched his war on drugs in 2016.

The Philippine National Police, however, acknowledges only more than 4,000 deaths in police operations.

But thousands more have been killed by motorcycle-riding gunmen in cases recorded by the PNP as “deaths under investigation.”

In the report, Malacañang commended the Department of National Defense, the military and the police for defeating Islamic State-inspired Maute and Abu Sayyaf terrorists who laid a siege on Marawi City that lasted for five months last year.

The report also noted the President’s issuance of Executive Order No. 28 in June 2017, regulating the use of firecrackers and other pyrotechnic devices.

It cited Executive Order No. 26, issued last May, on the creation of smoke-free places.

On foreign affairs and policies, the report included the signing of the agreement between the Philippines and Kuwait on the protection of Filipino domestic workers in the Gulf state.

It also mentioned the signing of the Universal Access to Quality Tertiary Education Act, which scraps tuition and miscellaneous fees at 112 state universities and colleges beginning this year.

The report cited the six-month closure of Boracay Island to give way to its rehabilitation after decades of pressure from uncontrolled development.