In the back alleys of poor communities where the war on drugs is waged the fiercest, “nanlaban” bears a grim weight.

It’s an official claim that the victim “resisted arrest” and engaged the police in a shootout. It’s a claim applied to thousands killed in the war, and whose families are hard-pressed to file charges.

But when Darwin Hamoy, 17, was killed along with three men in a purported buy-bust operation on Aug. 15, 2016, his mother, Mariza, and two other women took Batasan policemen to court.

The suit is considered the first among the rare acts of defiance against this state-sponsored narrative.

Crucial to Mariza Hamoy’s fight and that of many others like her is the commitment of the legal community, which has been guiding the victims’ families in exploring legal options.

Whether the families choose to seek future reparation or to file suit, lawyers are helping them realize that “nanlaban” does not necessarily equate to helplessness.

Using the money she pooled from mourners and gamblers at her son’s wake, Hamoy and two other women filed murder charges in the Office of the Ombudsman against 15 Station 6 policemen in September 2016.

Their commander, Supt. Leo Patay, is the alleged leader of the “Davao Boys.”

But on June 12, two years after they filed the case, Hamoy found herself abandoned by her two cocomplainants.

One, Kathrina Polo, the lone eyewitness to the crime, filed an affidavit of desistance claiming that her husband, Cherwen, and the four others killed in the operation had shot it out with police.

Polo also denied being present when the killings occurred in her own house, and said the media had forced her to lie about the incident.

The third complainant, Marilyn Bordeos, refused to cooperate as well. Now only Hamoy’s case stands against the Station 6 cops.

“I was angry. When I saw them again, I couldn’t even speak. I just knew they had switched sides,” Hamoy says, “Win or lose, I’ll continue the case. You will never hear me giving up on it, even if I have to fight on my own.”

Hamoy’s case is now being handled by private firms Lente and Artikulo Tres, among the law groups that took up the challenge of helping the drug war survivors.

“The times are extraordinary so we need to respond,” says Lente director May Butoy.

“The demand of the times is for us to document [these cases] so [the survivors] can seek accountability later on.” 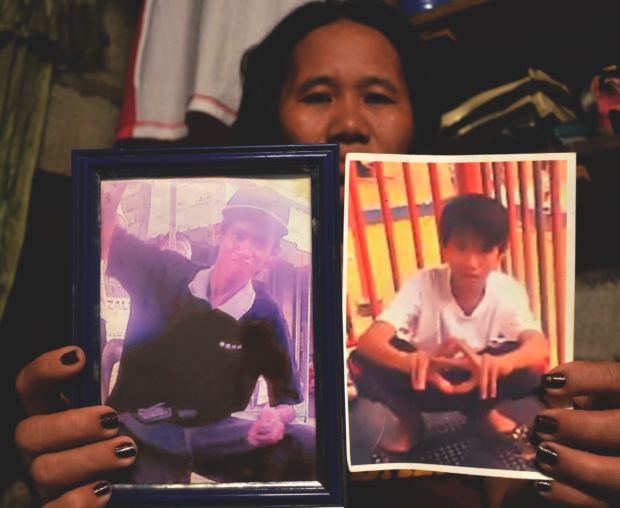 PURSUIT OF JUSTICE Mariza Hamoy, 44, is one of the three women who have filed murder raps against several Batasan policemen over their involvement in the death of her 17-year-old son, Darwin,whose photos she holds, in a buy-bust in August 2016. She insists that Darwin did not have a gun and that he was only buying cigarettes for one of the other victims, William Bordios,when he was shot. —KRIXIA SUBINGSUBING

In the two years since President Rodrigo Duterte declared his war on drugs, human rights groups estimate the death toll to be around 23,000 — mostly poor male breadwinners who were simply suspected of involvement in illegal drugs.

The impunity with which these extrajudicial killings (EJKs) are happening has led to a climate of fear, with most survivors refusing to press charges for fear of retribution.

The experience of “Lita,” who sought protection from the Diocese of Kalookan after her son, “Jose,” was shot dead by Caloocan police on Oct. 27, 2016, is illustrative. Four armed men had barged into the family home and even told Jose’s mother-in-law and child: Go upstairs, this won’t take long.

Jose was shot multiple times. But according to Lita, the police report stated that he had shot at the police during a buy-bust.

“I wanted to say, Why is your report like this? But police were everywhere. I was suddenly afraid they would shoot me on the spot,” Lita says. She has yet to press charges.

As early as 2016, with even the essential act of reporting a killing to authorities compromised, the Commission on Human Rights formed a network of eight law groups, including Lente, Artikulo Tres, Ateneo Human Rights Center, FLAG and CenterLaw, to focus on exploring legal remedies for EJK survivors.

The network has identified three stages of human rights violations (HRVs) made in the context of the war on drugs: unsubstantiated drug watch lists, illegal arrests and EJKs.

The HRV cases also seemed to have a nexus with the evolution of the drug war, according to a member of a legal rights group in Quezon City.

At the start of the President’s term, when the antidrug campaign enjoyed immense popularity, most of the killings documented by the group occurred during police operations.

As the drug war came under scrutiny for alleged abuses, eventually the cases involved killings perpetrated by “masked vigilantes” or simple warrantless arrests, the lawyer says.

Most of the cases were based on hearsay, with little or no hard evidence and witnesses. Thus, lawyers willing to take on drug-related cases were few, making the filing of suits difficult.

What the network advocates instead is transitional justice. In partnership with the social ministry of parishes and other religious communities, this legal option involves future reckoning for survivors through the costing of reparations.

“The environment is not right to seek [the prosecution of suspects]. That’s how we see it now,” Lente’s Butoy says. “But the beauty of transitional justice is you’re looking not just at the victims but also at the families they left behind.”

Under this framework, legal groups document both the killing and the damage done in the aftermath: Did the children stop going to school? Did the mother suffer from depression? These constitute harm unrelated to the crime but worth some form of compensation under a reparations board, says Lente executive director Ona Caritos.

In the interim, the network seeks to provide for the families’ urgent needs, such as livelihood, scholarship and financial assistance.

For it to work, the lawyers must temper the survivors’ expectations while ultimately giving them the power to choose to demand prosecution now or in the future.

But prosecution is not an impossible choice, says Gil Aquino of CenterLaw, which led the two high-profile “Tokhang” cases in Payatas, Quezon City, and San Andres Bukid, Manila.

Both cases won landmark rulings in favor of the survivors and are considered “blueprints” of how drug-related cases should be handled.

It’s called strategic litigation: filing representative cases, though few, that “can bring results . . . [to] show that the justice system can work, and that there are victims who have some sense of justice,” Aquino says.

Championing the strongest cases can win precedence that will hopefully reverberate even to the low-profile cases, he adds. This can also encourage survivors like “Mercy” to file suit against police, as she did in March 2017 in the Office of the Ombudsman.

Assisted by the National Union of Peoples’ Lawyers, Mercy brought murder charges against eight Caloocan cops accused of killing her husband and son inside their home at Barangay Bagong Barrio.

Despite her slim chances, she is “determined to make them feel that small people like us can still fight for our rights, that they can’t just take our lives away.”

“That’s representative justice,” Aquino says. “It gives people the idea that [you] just have to keep at it, because eventually there will be justice. But [you] have to ensure that cases are continuously being filed in the courts, to keep the policy in check.”

For the survivors to come forward, the legal community must have their back.

But most lawyers do not take up these cases because of fear of being tagged as drug protectors, conflicts of interest, or just “not feeling competent enough,” says June Ambrosio of the Integrated Bar of the Philippines.

She adds that the drug war has also led to sweeping changes in prosecuting drug cases under this administration. Gathering evidence for case buildup, for example, has become difficult.

The upsurge of drug cases and slim chances of prosecution have resulted in families likely to settle at the prosecutor’s level.

It doesn’t help that lawyers perceived as going against the government have become targets for harassment or even death threats, Aquino says.

“We can definitely do more [for the survivors],” says Ambrosio. “But we need to empower lawyers, capacitate them, . . . get [them] to step up and take a more proactive role in what’s happening.”

But every effort counts, and lawyers who are at the frontline need all the help they can get.