Healing wounds, finding a voice after nights of ‘nanlaban’

Glenda, 26, has gotten used to telling her story like a scene from a movie, her blasé tone masking the still seething anger.

On July 22, 2016, plainclothesmen killed her 50-year-old father in an antidrug operation in Navotas City. That same night, the killers took her three brothers from their house and brought them to the police station. She went to look for them but her older brother, 27, was no longer there.

She found him the next day in the same funeraria where their father’s body lay—lifeless, severely beaten, with some teeth missing.

The grief has subsided now. But Glenda still remembers how uniformed men said straight-faced that her father had fought back—nanlaban—when she knew he didn’t. Her story has become like a script, retold in the near-nightly extrajudicial killings (EJKs) in the backwater city.

Mercy, 44, whose husband and son were killed on Sept. 15, 2016, notes “a common theme for our stories: Kill the addicts, write a police report saying they fought back, and make the poor families suffer.”

Glenda, Mercy, Ana and Lita call themselves survivors. Their first steps toward healing from the wounds inflicted by the Duterte administration’s war on drugs are being made possible by the Catholic Church.

The Church maintains, as stated in a January 2017 pastoral letter by Archbishop Socrates Villegas, president of the Catholic Bishops’ Conference of the Philippines, that killing suspected drug users and pushers is not the solution to the so-called drug problem.

But with Church mediation limited to individual efforts of parishes and religious communities, there remains a need for a centralized directive to rally a multistakeholder approach to reparation and the survivors’ healing process. 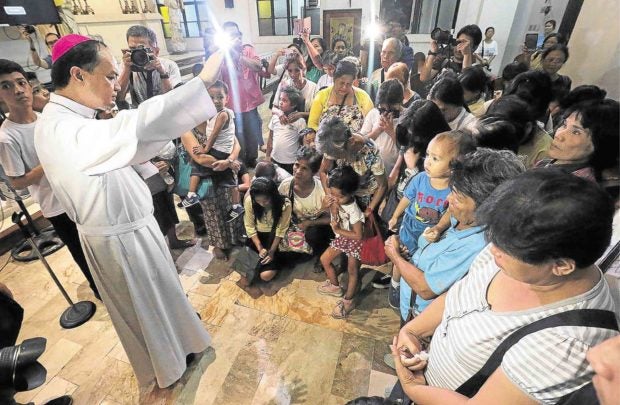 FLOCK IN PAIN Bishop Pablo David of the Diocese of Kalookan prays with the families who lost loved ones in the war on drugs, during an Oct. 24, 2017, novena at San Roque Cathedral in Caloocan City. —GRIG MONTEGRANDE

As a local law group working with the Church has observed, some parishes remain unreceptive to the survivors’ pleas, deny the killings in their community, or flatly refuse to be involved.

Yet the Church remains a galvanizing figure in assisting the survivors because it is the most visible institution in communities ravaged by the drug war.

Funeral expenses are among the biggest problems of the bereaved. At the police-assigned funeraria where Glenda’s father and brother were taken, the family was told to pay P50,000 per body. Other families were forced to haggle the claiming fee to a minimum of P10,000, just so they could redeem their loved one’s body and move it elsewhere with a cheaper funeral service.

Destitute and feeling helpless, the killings fresh in their minds, Glenda, Mercy, Ana and Lita moved from city to city, parish to parish, to seek aid. That was how they found the Redemptorist Church of Baclaran, which had been helping survivors bury their dead. The parish has since shelled out some P3 million in funeral assistance for victims of EJKs.

It was also how Glenda and the others met Redemptorist Brother Jun Santiago, Caloocan Bishop Pablo David and Father Flavie Villanueva, all of whom helped them get on the long road to healing. The four women are now among the 148 beneficiaries of the Diocese of Kalookan’s localized version of Villanueva’s Project Paghilom (healing) for EJK victims.

Glenda and Mercy are part of the group that made the mosaic mural in Baclaran church, an activity that helped them earn a bit of money. The mural, “Panagpo,” also served as therapy for other survivors, mostly young mothers needing to feed their children. Through the Church’s efforts, the mothers and their kids undergo psychosocial counseling from civil society volunteers.

Ryan Rezo, program coordinator for the Diocese of Kalookan, said the listing of EJK victims in Caloocan-South, Malabon and Navotas began last December. The diocese has since been providing scholarships for the survivors’ children, as David deems education the most pressing need of the moment.

By prioritizing widows and mothers who are now breadwinners, the program is seen as a template for even the small parishes. But Rezo admits that institutionalizing the program is an arduous process requiring the cooperation of church workers.

Ana, 43, a washerwoman from Bagong Barrio in Caloocan, carries the memory of her husband’s killing in 2016 like a knife in her chest. Daily existence is now a struggle for her and her three sons, two of whom are in grade school and the youngest only 4 years old.

She speaks of a phase when she couldn’t talk with other people and wanted to shut herself off from the world. “I couldn’t even face my employer. There is no peace of mind with the trauma we experienced,” she says.

Ana and her kids have yet to undergo counseling, but the social paralysis extends beyond daily interaction: It has also cut off their access to livelihood.

The same goes for Lita, 57, who takes multiple jobs so she can care for the three kids left by her son, who was killed in a buy-bust operation on Oct. 27, 2016.

Soc Reyes of Baigani, a community that helps empower EJK survivors, says the killings have imposed a double burden on widows and their children who need to cope with the stigma and trauma and also fend for themselves, bereft of their husbands and their access to livelihood.

Ana recalls how she once saw her 8-year-old son cutting up a wall calendar bearing a picture of President Duterte. “I was shocked,” she said.

She glued the torn pieces together, as if to tell her son that they, too, could recover the dignity they lost in his father’s brutal killing.

She remembers when the boy adamantly refused to buy a map of the Philippines that he needed for a school assignment because it had Mr. Duterte’s picture on it. He asked: Isn’t there a Philippine map without Duterte’s face? The next day, he was sent home by his teacher.

Ana says she told her son to let go of his anger. But he continues to show violent tendencies—cursing and brawling with classmates who jeer that his father died because of drug addiction.

Lamentably, she says, even her youngest son has learned to put the words “gun” and “Duterte” together: “’Yung papa ko, balil Duterte,” she says, mimicking him. She fears that her kids will harbor violent thoughts and anger until they grow up.

Ana and her husband voted for Mr. Duterte: “He told me, we should take a chance on this new leadership, on the change he has promised. I didn’t even remove the Duterte baller he was wearing when he was killed, not even when he was buried. If only he could speak to me, he’d tell me this is not the change we wanted. My children are suffering because of the antidrug campaign.”

For other survivors, overcoming grief and loss is only the first step to true healing. What they need now is for their voices to be heard.

“Our wish is for us to have peace of mind,” says Mercy. “No more deaths, no more crying children who will grow up without their parents. We’re not telling our stories to shame the government. We’re doing this because we want officials to wake up. We won’t curse at them, or insult them. We will ask for their understanding, and for them to hear our pleas.”

(First of three parts)
(The names of the survivors have been changed. –Ed.)