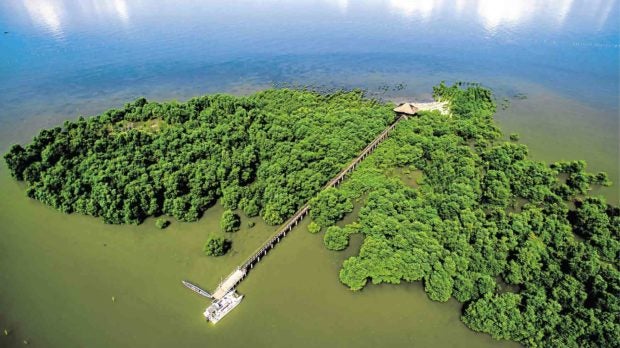 MANGROVE FOREST Bangkong Malapad in Sasmuan town, Pampanga province, is a mangrove forest in the middle of a 405-hectare mud flat that formed from the accumulation of volcanic sediments from Mt. Pinatubo. —JOSHUA REYES / CONTRIBUTOR

SASMUAN, Pampanga — Three measures to mitigate climate change have been taking shape right where Pampanga’s ancient civilization had begun, and these included the awakening of Mt. Pinatubo, the volcano that cooled the earth following its 1991 eruptions after centuries of slumber.

At Batang Dos village in Sasmuan town, which sits at the mouth of Manila Bay, residents take care of a 405-hectare grayish mound that had formed from the accumulation of volcanic sand and mud carried down by rain through Pasac River.

A total of 13 ha of fully grown mangroves shielded the village from the strong winds and waves stirred by Typhoon “Glenda” (international name: Rammasun), a Category 5 supertyphoon, in July 2014, according to fisherman Richard Roxas.

“If not for those mangroves, Batang Dos would have been wiped out,” Roxas told a team screening finalists in the national Gawad Kalasag Award for local governments with best practices in disaster risk reduction and management.

The province derived its name from the word “pampang,” meaning riverbanks.

Disastrous to the poor

Gov. Lilia Pineda said the effects of climate change, such as stronger storms, longer droughts and hotter weather, could be “disastrous especially to poor people, which is why more efforts should be done to help them deal with climate change.”

Amanda Guevarra-Coronel, who was elected village chief of Batang Dos in May, said the community learned that the climate change phenomenon was real through Typhoon Glenda. In this delta, land sinks 2 to 8 centimeters a year, making flooding worse.

“Glenda was an eye-opener. When you live in the coastal areas, you’re used to harsh weather, but Glenda showed us that stronger typhoons are with us now,” Coronel said.

“Pulung Malapad” was how residents called the small grayish mound from Mt. Pinatubo that expanded over time.

Trees grew to maturity from propagules carried by birds from the 100-ha mangrove forest at the village of Consuelo in Macabebe town or stands of mangroves at Orani town in Bataan province, that are south and northwest, respectively, of Sasmuan.

The local and provincial governments, the Department of Environment and Natural Resources (DENR), universities and colleges have been mobilizing residents and volunteers to do regular cleanup drives or mangrove planting. The provincial government loans out three boats to haul trash for these activities.

Coronel could not tell when the mangrove forest took the name “Bangkong Malapad” (wide bench).

Batang Dos and four other coastal villages—Mabuanbuan, Batang Uno, Sebitanan and Malusac—have embraced the forest because food abounds from crabs, shrimps, shells and fishes that thrive in the mangroves. 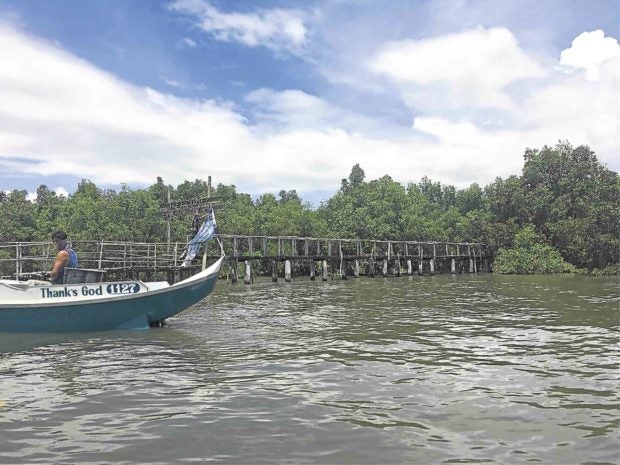 PROTECTION This mangrove forest protected 285 families at Barangay Batang Dos in Sasmuan town when strong winds whipped up by Typhoon “Glenda” battered the provinces of Pampanga and Bataan in July 2014. —TONETTE OREJAS

The mangroves also bring revenue through ecotourism. Batang Dos and the town get 20 percent each from P20 in ecological fees collected from tourists and which are added to the budget for services. Sixty percent of fees pay for the allowances of two caretakers.

A 120-meter boardwalk with a view deck makes bird counting and viewing easier.

Tourists have been coming there as well, providing extra income to boat owners.

In Masantol town, the Center for Emergency Aid and Rehabilitation has introduced “floating agriculture” to 32 families in the villages of Sapang Kawayan and Nigui to supplement food supplies during floods and high tides.

Some 13 kilometers upstream at the village of Sta. Catalina in Lubao town, 325 clumps of bamboo have grown tall on a 6-ha stretch of Pasac River to protect the banks.

In October last year, the western bank was planted with 1,500 seedlings through a grant from the National Commission for Culture and the Arts, according to Laila Tulabut, coordinator of Lubao Bamboo Hub and Ecopark.

“Bamboos are like good lungs. These help us breathe,” Tulabut said, calling attention to the cool breeze in a part of the 1.5-ha ecopark.

Vice Gov. Dennis Pineda started bamboo planting in these parts when he was mayor. His sister, Mayor Mylyn Cayabyab, sustained the activity.

At the other side of the dike, Cayabyab established in 2010 a materials recovery facility for the town’s garbage, a vermicomposting area, a center that makes products out of bamboo, a nursery that grows and sells bamboo, cottages, charcoal briquetting area and bambusetum with 40 species.

Entrance to the ecopark is P10 for Pampanga residents and P20 for nonresidents. The use of huts and tables is free, while minimum fees are collected for fish spa, biking and other recreational activities.

The DENR has been asked to declare the forest the Bangkong Malapad Critical Habitat and Ecotourism Area for its protection.

Called the Internet of Things, the connected mangroves project is the first of its kind in the Philippines.

“It’s a version of ecotourism that protects and supports the community and the people, and so the people should take care of the environment as well,” said Jayson Salenga, Sasmuan tourism officer.