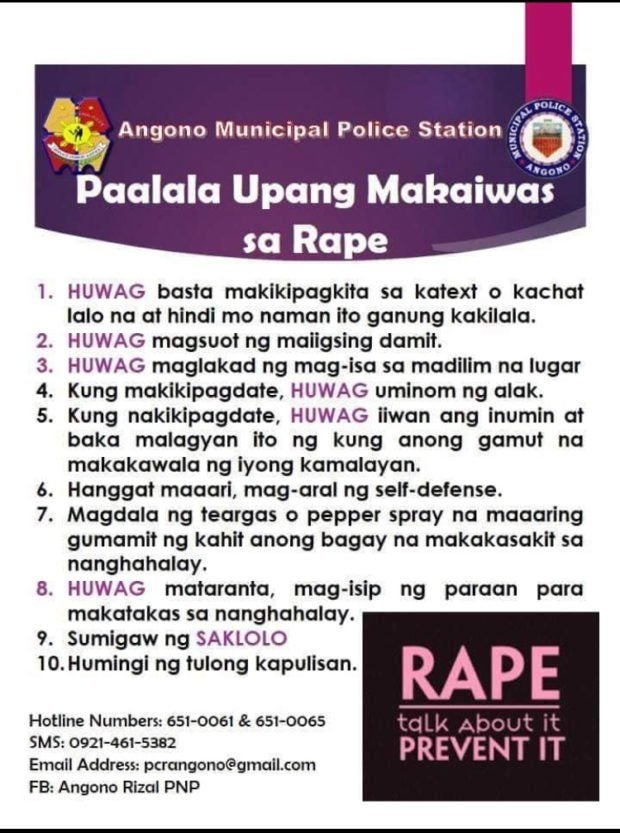 Deluged by criticism from netizens, women’s groups, and public officials over antirape tips it posted on its official Facebook account, the police office of Angono town in Rizal province issued an apology on Thursday.

The Angono police also took down the controversial “reminders” on how women could avoid rape after groups took offense at what they called “victim-blaming.”

Supt. Ruben Piquero, police chief of Angono, said he was glad that people were now talking about crime prevention and gender sensitivity.

In its statement of apology, the Angono police said it only wanted women to avoid becoming victims of sexual assault.

“As they say, an ounce of prevention is worth a pound of cure,” the police statement said.

In a phone interview, Piquero said the antirape post was lifted from the leaflets which the local police distributed as part of its anticrime awareness program in the town.

He said that in Angono, the police had recorded and solved three rape cases from January to March this year.

The police tips advised women against wearing skimpy clothes to avoid being raped. Women, too, were encouraged to always carry pepper spray or tear gas and learn self-defense.

“When on a date, don’t drink alcohol,” it added.

The post was also criticized by Sen. Risa Hontiveros who said that “clothes don’t cause rape (but) rapists do.”

“The Angono police’s antirape flyer lays unwarranted blame [on] rape victims. The material they issued is not only an insult to many victims of rape and other forms of sexual violence, but also sends a wrong signal that women are raped because of our actions or preferences,” the senator said in a statement on Wednesday.