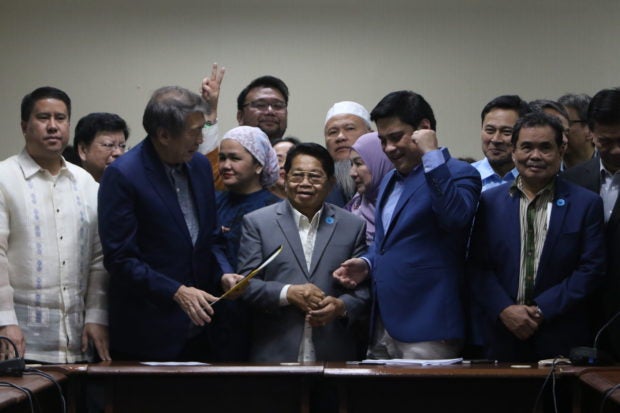 FINAL VERSION Members of the bicameral conference committee and the Bangsamoro
Transition Commission rejoice after the approval of the proposed Bangsamoro Basic Law on
Wednesday night. —RICHARD A. REYES

One year to the day of the submission of the draft measure to Congress, a bicameral panel approved on Wednesday night the final version of the Bangsamoro Organic Law that is seen as a crucial component to bringing peace and development to Mindanao.

The conference committee’s report on the proposed Bangsamoro Basic Law (BBL) will be submitted to the Senate and the House of Representatives for ratification on July 23 before it is signed into law by President Rodrigo Duterte.

No date has been set for the signing.

The approval came after six days of marathon hearings marked by intense discussions that necessitated an intervention from the President himself.

Ghadzali Jaafar, chair of the Bangsamoro Transition Commission (BTC) that drew up the draft, was present during the approval and said he was “happy” with the measure.

“It may be not a perfect law, but it is good to start with,” Jaafar told reporters.

The new region that would be created would be known as Bangsamoro Autonomous Region in Muslim Mindanao.

BBL shows no need for Cha-cha

Hours before the measure was approved, Senate Minority Leader Franklin Drilon told reporters that  the imminent approval of the proposed BBL showed there was no need to overhaul the 1987 Constitution to have strong, autonomous local governments.

Drilon made the remarks amid the administration’s preparations for Charter change for a shift to federalism, a plan that has yet to muster popular support as shown by a recent poll that said nearly seven of 10 Filipinos reject the proposal.

Its advocates say federalism was necessary to bring more development to the regions, as power and resources tended to be concentrated in the capital, Manila.

But according to Drilon, the crafting of the proposed BBL showed that it was possible to give local governments stronger powers and greater autonomy.

If ratified, the BBL would give the Bangsamoro region fiscal autonomy and a block grant. It would also allow the Bangsamoro government to decide where to allocate its own resources and to impose taxes.

The region’s other powers include being able to enforce urban and land reform and administer its own justice system.

The BBL would establish a parliamentary regional government, which Drilon believes may be challenged in the Supreme Court.

House Majority Leader Rodolfo Fariñas expressed confidence that the measure could stand any constitutional test and welcomed a Supreme Court challenge to prove this.

“We were very careful. Precisely we had several problems along the way because we could not grant everything they [BTC members] want. In fairness to them, they accepted everything,” Fariñas said.

The plebiscite for the Bangsamoro will be held not earlier than 90 days and not later than 150 days after the President signs the law.

Former Chief Justice Hilario Davide Jr., who opposes federalism, said on Tuesday  there was no need for the shift to federalism just to fund local government units (LGUs) after the Supreme Court ruled that the 40 percent of the internal revenue allotments for LGUs should be based on all national taxes, not just local tax collections.

The LGUs would now be able to collect their share of the national taxes owed them since 1992, and that amounted to about P1.5 trillion, he said, quoting an estimate by Finance Secretary Carlos Dominguez III.

The Supreme Court ruling, Davide said, was a “mortal blow” to the arguments of federalism advocates who have been saying that the federal system was intended to do away with “imperial Manila” and recognize the rights of LGUs to their just share of national funds and resources.

In one of the protracted discussions on the final version of the BBL on Tuesday, members of the conference committee and the legislation’s main proponents agreed that the term Bangsamoro should not be mentioned in the preamble.

No ‘Bangsamoro’ in preamble

Jaafar said he and the other commissioners had raised concerns when the words “Bangsamoro people” were removed from the introduction to the draft law during the committee’s deliberations.

Fariñas admitted that he had pushed for the deletion.

“I was the one who introduced it because of the way it was worded. The phraseology is not sensible,” Fariñas said.

He said the preamble would have begun with the words, “We, the Bangsamoro people” but the use of the phrase would have violated the Constitution, which directed only the Congress to make laws creating the Muslim and the Cordillera autonomous regions.

The “we,” he explained, should refer to Congress as representatives of the Filipino people, not just the Bangsamoro.