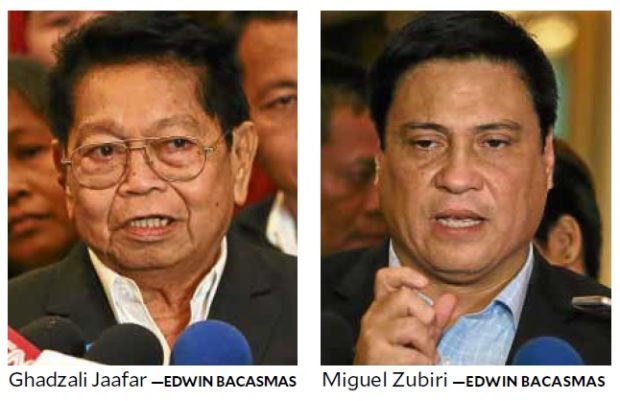 Should the proposed Bangsamoro Basic Law (BBL) repeatedly mention that laws enacted by the autonomous region’s parliament must be “subject to national law?”

This question came up at the last minute, just as when the Senate-House conference committee was aiming to finalize the draft of the measure on Tuesday afternoon.

The conferees failed to clear the bill because of the objection raised by stakeholders led by the Bangsamoro Transition Commission (BTC).

Work on the measure will continue on Wednesday.

Asked why the conference committee could not finish its task within the targeted time, House Majority Leader Rodolfo Fariñas, the group’s cochair, said the deliberations got extended because of “due diligence out of our desire to come up with a better output.”

The wording was so important that BTC Chair Ghadzali Jaafar, earlier in the day, told reporters: “If that will happen, we will also change our opinion regarding the Bangsamoro Basic Law.”

Later, Senate Majority Leader Juan Miguel Zubiri explained that the BTC members were “ticklish to the issue that continuously mention the word ‘national laws’ in each and every paragraph, in each and every article.”

Although Zubiri played down the significance of such a wording, he said the lawmakers agreed to just mention this qualification under the “general principles and policies” of the measure.

Even with the reduced mention in the draft BBL, Zubiri noted that Section 20, Article X of the 1987 Constitution mandates that the regional laws should be “subject to the provisions of this Constitution and national laws.”

“It’s not very important, but it is a cause of concern to some members of the BTC. We’ve resolved it now,” he told reporters on the sidelines of the closed-door deliberations in Mandaluyong City.

He said the BTC was initially worried that “we would have problems with the parliament in the Bangsamoro” had the measure been peppered with the phrase, although he did not specify these concerns.

The final deliberations on the measure was also aimed at dealing with another contentious provision: the administration of the region’s inland waters such as Lake Lanao.

But Zubiri on Tuesday told reporters that inland waters would likely be placed under “comanagement” with the national government, especially as Lake Lanao’s hydropower supplies 30 percent of the energy needs of the entire Mindanao.

Instead, a 50-50 revenue-sharing scheme would be implemented when in the use of inland waters, similar to the proposals for the use of fossil fuels.

Asked if the BTC was satisfied with the compromise, Jaafar replied in the affirmative.

“We are looking forward to an enhanced bill,” Iqbal told the Inquirer by phone.

“The totality of the bill as expected is not 100 percent but I would rate it as 85 percent,” he said.

But the Bangsamoro Insider Mediators, a group of civil society organizations awaiting the final text of the measure, called on Congress to be faithful to the concessions made under the 2014 peace agreement.

Allian said the inland waters should be exclusively governed by the regional government “without distinction whether it be a source of energy or not.”

Drieza Lininding noted that historically, the governments of Lanao del Norte and Iligan City have gotten much of the hydropower revenue despite lying outside the Autonomous Region in Muslim Mindanao — instead of the Moro province of Lanao del Sur where the lake is located.

This was because the power-generating plants were located in Lanao del Norte and Iligan City.

“Radical groups and extremism occur because of the unequal policies,” Lininding said.

Other provisions that the groups wanted to be restored include the holding of periodic plebiscites to determine if other areas wanted to join the Bangsamoro, and the delimitation of the Bangsamoro waters to 22.224 kilometers from the coastline. —With reports from Julie Alipala, Kristela Danielle Boo and Anna Patricia Campos