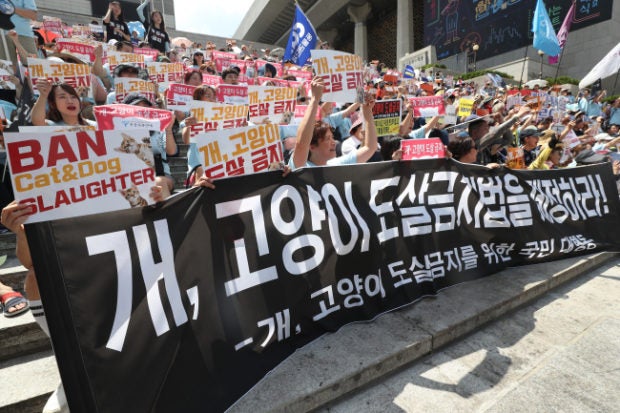 Protesters hold signs asking for the ban of cat and dog slaughter in front of Sejong Center in Jongno-gu on Sunday. (Yonhap)

SEOUL — Hundreds of protesters held a rally for and against dog meat consumption near Sejong Center for Performing Arts in Gwanghwamun on Sunday ahead of chobok, a day when Koreans traditionally eat “stamina food.”

Koreans commonly eat hot bowls of supposedly stamina-boosting soups on the three “bok” days of summer. The days are referred to as chobok, jungbok and malbok and fall on July 17, July 27 and Aug. 16, respectively.

Some of these soups involve commonplace meats such as chicken, but others have dog meat in them.

The Korean Animal Welfare Association, Korean Organization for the Protection of Cats and other animal-rights groups asked for prohibition of dog and cat slaughter, saying the current animal protection law is not strict enough to stop animal slaughter.

The protesters pointed out in a press release that there are around 15,000 dog farms nationwide and around 2 million dogs were slaughtered yearly.

In front of Donghwa Duty Free near the Sejong Center, owners of dog farms and slaughterhouses protested for the protection of their livelihoods, stating that information about dog farms spread by the animal rights groups was not accurate.

An online petition asking the government to pass the legislative bill for the revision of the animal protection law proposed by Pyo Chang-won, a lawmaker from the Democratic Party, had gained 178,000 signatures on the Cheong Wa Dae website by noon on Monday.

Pyo aims for practical measures to prevent animal abuse and illegal killing as dog meat consumption remains a gray area in the Korean legislation with no specific ban which still gives space for unreported animal slaughter.

Controversy over dog meat consumption has grown, as a Korean court ruled in April that the killing by electrocution of a dog for consumption violated the law on animal protection. The case was brought by the animal rights group Care against a dog farm owner in Bucheon, Gyeonggi Province. The owner was fined 3 million won ($2,700).

In a poll by Realmeter on June 25, around 51.5 percent of people said they were against the dog meat ban while 39.7 percent said they were for the ban. The remaining 8.8 percent of respondents had no opinion on the matter.