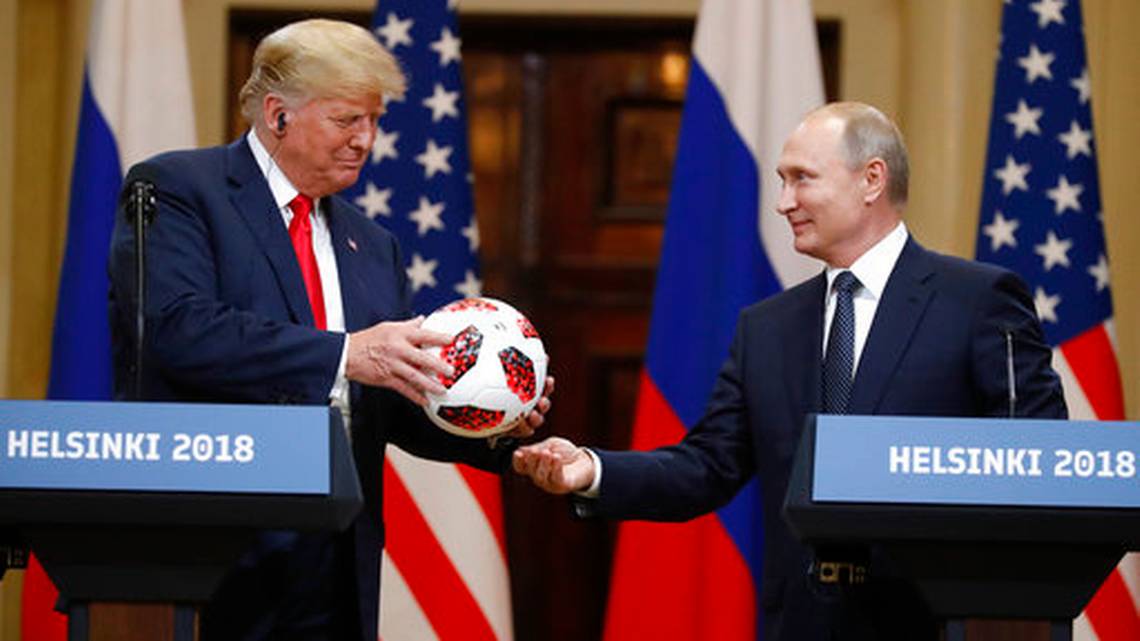 NEW YORK — Seconds after President Donald Trump’s news conference with Russian President Vladimir Putin ended Monday, CNN anchor Anderson Cooper called the American leader’s performance “disgraceful.”It was the most startling of several strong media reactions to the session, televised live by the largest American broadcasters and cable news networks, primarily because of Cooper’s role. He was the news anchor directing CNN’s coverage, as opposed to a pundit paid to be opinionated.

“You have been watching perhaps one of the most disgraceful performances by an American president at a summit in front of a Russian leader, certainly that I’ve ever seen,” he said.

Cooper later said it was embarrassing and compared the way Trump repeatedly brings up the issue of former opponent Hillary Clinton’s emails to something the autistic lead character in the movie “Rain Man” might do.

For the president, it’s likely to add another to his list of grievances about a network he has denounced as “fake news.” The White House over the weekend took action following CNN reporter Jim Acosta’s attempt to interject a question into a Trump news conference Friday by pulling Trump national security adviser John Bolton from a planned appearance on Jake Tapper’s weekend show.

Monday’s news conference turned on some sharp questions by Jonathan Lemire, White House correspondent for The Associated Press. Lemire asked Trump whether he agreed with the nation’s intelligence community, which has concluded Russia interfered in the 2016 elections, or Putin, who has repeatedly denied it. Lemire also asked whether Trump would denounce election meddling and warn Putin not to do it again, and asked Putin whether Russia had gathered incriminating material on the American president.

Trump responded, “I have great confidence in my intelligence people, but I will tell you that President Putin was extremely strong and powerful in his denial today.” He denounced the federal investigation into Russian interference efforts as a “disaster for our country.”

Putin said allegations that Russian intelligence agencies had collected compromising information on Trump were “sheer nonsense.” But he acknowledged that he had personally favored Trump in the race over Clinton.

“It’s hard to find words to describe,” ABC’s George Stephanopoulos said after the news conference. “All of you who are watching today will be able to tell your friends, family, your children, your grandchildren you were watching a moment of history. It may not be for the right reasons.”

Added NBC’s Hallie Jackson: “I think a fair word would be extraordinary. I have covered this president since the moment he was sworn in and have never been at a press conference like this one.”

CBS’ Margaret Brennan said she was messaging some U.S. officials during the speech who said they were turning off the television. “It’s a punch in the gut,” she said.

There were mixed reactions on Fox News Channel, whose commentators usually represent Trump’s biggest supporters. Fox will have a key role in the leaders’ attempt to spin the summit, since Trump is being interviewed by Sean Hannity on Monday night, and Putin has sat down with Chris Wallace on Monday. An interview with Trump by Tucker Carlson will air on Fox on Tuesday night.

“Shameful, disgraceful, treasonous — those are some of the descriptions of what President Trump did today in Helsinki,” Fox’s Shepard Smith said to open his news show. Wallace appeared with Smith to describe his own 35-minute interview with Putin.

Wallace said he did what he suspected Trump did not do in the president’s private meeting with Putin — show the Russian leader a copy of the indictments handed down last week against a dozen Russian intelligence officials for their actions in the 2016 presidential election.

Putin didn’t want to see it, Wallace said. “He put it down on the table,” he said.

Some at Fox seized on tweeted criticism by former CIA director John Brennan, who said Trump’s performance was near treasonous. That was extreme, said Fox’s Ed Henry.

Making note of some of the political reaction to the news conference, Fox news anchor Bret Baier said Trump probably caused himself a lot of problems with his answers. “This isn’t a president who seems to want to shy away from any of that, though,” replied Fox’s Harris Faulkner. “He’s doing what he’s doing.”

Fox Business Network’s Neil Cavuto said he’ll give Trump the benefit of the doubt that maybe he was suffering from jet lag or other problems related to the time difference in Helsinki.

Before the news conference, a contributor to The Nation magazine, Sam Husseini, was forcibly removed. It wasn’t clear why, but he was holding a piece of paper that said “Nuclear Weapons Ban Treaty.”

Later Monday, The Nation’s editor and publisher, Katrina vanden Heuvel, mentioned the incident in an email asking for a donation to support the magazine’s journalism.