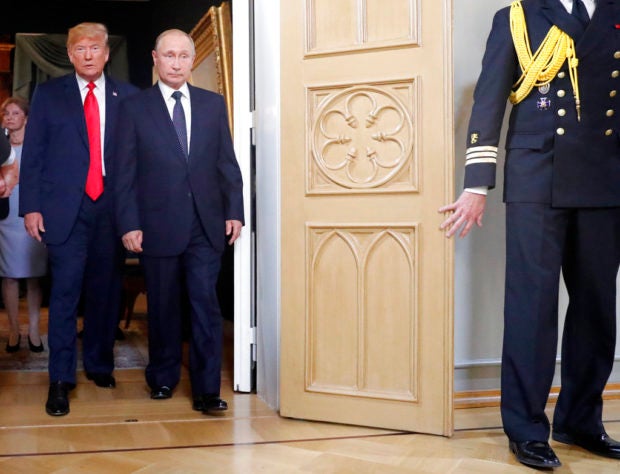 US President Donald Trump (left) and Russian President Vladimir Putin arrive for a one-on-one-meeting at the Presidential Palace in Helsinki, Finland on July 16, 2018. AP

HELSINKI —  President Donald Trump says he and Russian President Vladimir Putin have had a “good start” to their high-stakes summit in Finland.

Trump is calling his meeting with Putin “a good start, a very good start for everybody” as the two leaders and their top advisers sat across the table from one another during a luncheon. It followed more than two hours of one-on-one discussions involving just the US and Russian leaders, with only translators present.

The White House had scheduled 90 minutes for that meeting.

Trump was joined at the luncheon by Secretary of State Mike Pompeo, US Ambassador to Russia Jon Huntsman and other top aides.

After the lunch, Trump and Putin will appear for a joint news conference in Helsinki.

It’s not the first time the presidents’ talks have gone long. In their first meeting last year, they ended up talking for more than two hours. Midway through, first lady Melania Trump was sent in to help wrap things up. Trump and Putin continued to talk for another hour. /ee