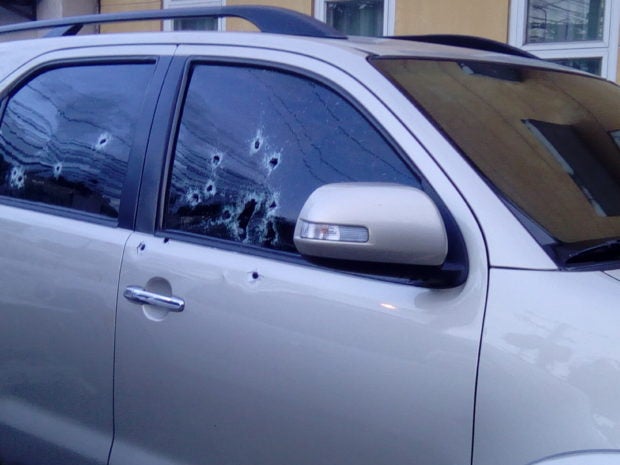 General Tinio Mayor Ferdinand Bote was riding in this vehicle when it was attacked by motorcycle-riding men in Cabanatuan City on Tuesday afternoon. (Photo by ARMAND GALANG / Inquirer Central Luzon)

The Philippine National Police (PNP) tagged on Monday the possible mastermind in the killing of Mayor Ferdinand Bote of General Tinio town in Nueva Ecija province, following the arrest of the suspected gunmen and the surrender of an accomplice.

In a press briefing at Camp Crame, Dir. Gen. Oscar Albayalde, PNP chief, identifed the suspect as Christian Manlutac Saquilabon, owner of the company Forthright Construction, which had a P96-million contract for a tourism infrastructure project of the Department of Public Works and Highways (DPWH) in Bote’s town.

In the same briefing, Chief Supt. Amador Corpus, director of Police Regional Office 3, said conflict over the project – the Minalungao Tourism Convergence Zone – appeared to be the cause of the killing.

“The motive is associated with a quarrel over projects and business contracts,” Corpus said.

According to Corpus, Saquilabon ordered the hit on Bote for an initial payment of P25,000, because Bote had been exerting too much pressure on the contractor.

“Yes, it was based on their confession,” Corpus said. “All of them, as supported by Arnold, tagged Christian as the one who insisted that that was his problem with the mayor… The exact word was “has been overly harassing” him,” Corpus said, speaking in a mix of Filipino and English.

Corpus said that Bote, as mayor, would have had to issue permits for government projects, while he himself owned a construction company.

The connection began to unravel with a witness identifying Gumatay as one of the motorcycle-riding gunmen in Bote’s killing.

A Toyota Avanza used to pick up the suspects a kilometer from the crime scene was seen in security footage in the village of Imelda, Cabanatuan City.

On the day of Bote’s killing on July 3 outside the National Irrigation Adminisration compound in Cabanatuan, the Avanza was seen entering the Iglesia ni Cristo compound on Zulueta Street in the same city, leading to Gamboa’s identification.

It was this car that was being used by Gumatay and Suarez when they were flagged at a checkpoint in in Del Gallego town, Camarines Sur on July 11.

Found in the vehicle were two firearms used in the killing of Bote.

Corpus said the suspects confessed that eight people were involved in the assassination plot.

Aside from the three suspects already under police custody and Saquilabon, police also identified a certain Jun Fajardo as among those involved. Fajardo was the “spotter” for the gunmen.

Three other suspects have not been identified.

As of this posting, Saquilabon and Fajardo were still at large.

Albayalde said police were not discounting the possibility that “there may be someone higher” than Saquilabon in the plot.

Police will request that a hold departure order be issued for Saquilabon as soon as the murder case against him has been filed, according to Albayalde.

Corpus said the Special Investigation Task Group (SITG) Bote has identified five of the eight suspects in the killing – Saquilabon, Suarez, Gumacay, and Gamboa; and so-called spotter Jun-jun Fajardo, who is still at-large. –With reports from Andrea Alcaraz and Julia Ornedo