Bong Go: I didn’t do any politicking at Boracay event for displaced workers 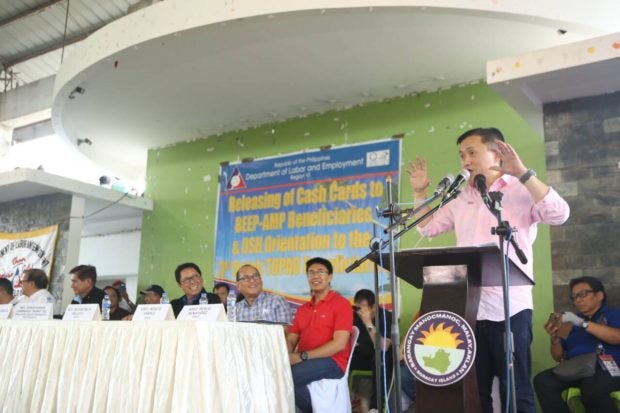 Special Assistant to the President Christopher “Bong” Go on Monday denied criticisms that he was politicking when he attended the distribution of cash cards to displaced workers in Boracay Island.

Go said he was invited by Labor Secretary Silvestre Bello III to the event under the Boracay Emergency Employment Program (BEEP).

He said Bello invited him to Boracay to see the progress of the rehabilitation of the resort island, which was closed for six months starting on April 26.

“Inimbita ako ni Sec Bello para makita naman niya yun, at tsaka ni Sec [Roy] Cimatu para makita ‘yung progress nung rehab, at tsaka makita ‘yung kalagayan ng mga andun (Secretary Bello invited me so I could see it, and also Sec Cimatu, to see for myself the progress of the rehab and the plight of the residents there),” he said.

“Careful na careful ako. Ba’t nila gagawan ng storya na ‘draws flak’ ako, na namulitika ako dun. And klaro sa speech ko na walang politika dito, nangamusta lang ako dito (I was very, very careful. Why would they write a story about me drawing flak, that I was politicking. It was clear from my speech that no politics was involved, that I was just there to check out the situation),” he added.

Go was wondering why others perceived his attendance to the event as politicking. 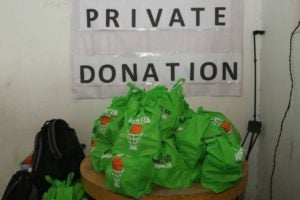 The President’s aide said the grocery packs distributed to the residents during the event were private donations.

Go sent to INQUIRER.net photos of the said donations from private donors.

Go said he was not politicking when he attended the event.

“Yun lang, nandodoon ako. Hindi ako namulitika. May (video) mismo ang government TV na wala akong sinabi na ni isang salita about politicking, pamumulitika, kaya hindi ko maintindihan ba’t sinabi niya ‘draws flak’ (That’s it. I was just there but I did not do any politicking. There’s a video by government TV which shows I didn’t say anything about politics. That’s why I can’t understand why it was reported that I drew flak),” he said.

“Alam mo sa totoo lang masayang-masaya ‘yung mga tao doon na nabisita sila (You know, the truth is the residents there were so happy they got visitors),” he added.

Go said he was there as a representative of the Office of the President.

In a phone interview, Bello confirmed that he invited Go to the event.

“We invited him to assess the rehabilitation of Boracay,” he said.

The distribution of cash cards to the residents was only “incidental” and not intended for the presence of Go.

Go gamely posed for selfies with residents, many cheering as President Duterte’s longtime assistant was introduced on stage.

A supporter of Go impersonated the President on stage and heaped praises on Go.

Go, however, repeatedly denied eyeing a Senate seat, although he was openly endorsed by his boss and by dozens of streamers, banners, posters, and billboards that sprouted all over town. With a report from Nestor Burgos, Inquirer Visayas/je/ac