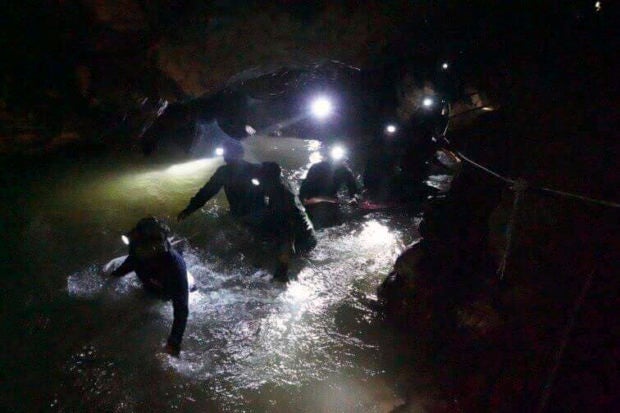 In this handout photo released by Tham Luang Rescue Operation Center, Thai rescue teams walk inside cave complex where 12 boys and their soccer coach went missing, in Mae Sai, Chiang Rai province, in northern Thailand, Monday, July 2, 2018. Rescue divers are advancing in the main passageway inside the flooded cave in northern Thailand where the boys and their coach have been missing more than a week. (Tham Luang Rescue Operation Center via AP)

The “Wild Boars” team was stuck in the cave in northern Thailand for 18 days before Thai Navy SEALs and international cave diving experts successfully removed them in a highly risky, three-day-long operation.

Their participation came after negotiations between Australian and Thai authorities accorded them diplomatic immunity to protect them from possible prosecution if anything went awry during the treacherous mission, ABC reported, citing an official source.

Australia’s foreign affairs department declined to confirm or deny the report, referring questions about the planning and implementation of the rescue to Thai officials.

The mission was “absolutely life and death” and the cave diving specialists were uncertain if they would be able to successfully save all 12 boys and their coach, Challen told local media after returning home.

“It wasn’t dangerous for us, but I can’t emphasize enough how dangerous it was for the kids,” he told Perth’s Sunday Times.

The children were sedated to the point that “they didn’t know what was going on” to prevent them from panicking as they were led by the divers along the tight corridors, Challen also said.

“They had drugs. We could not have panicking kids in there, they would have killed themselves and possibly killed the rescuer as well,” he added.

The divers said they trained above ground with local children at a nearby pool, before practicing with the trapped boys by getting them used to donning wetsuits, buoyancy jackets and full-face masks.

Navigating through one narrow section of the tunnel in pitch darkness was particularly challenging, British diver Jason Mallinson told the ABC.

“The only time you find out about (the section) is when your head bangs against the wall,” he said, describing his efforts to squeeze one boy he was rescuing through each obstacle.

“Because if we bashed him against a rock too hard and it dislodged that mask and flooded his mask, he was a goner… We didn’t have a backup device for them. It was that mask or nothing,” he added.

Doctors said the boys, who are recovering in hospital after their extraction last week, are in good health. /kga

Read Next
Deputy Speaker Garcia: House not giving up on federalism
EDITORS' PICK
Look Through: Super Typhoon Karding barrels through parts of Philippines
Motorcycles, smartphones, and cash prizes up for grabs in TNT’s ‘Tuloy Ang Saya’ Raffle in Mindanao
Do all the things you do, faster
POGOs not linked to Illegal online gaming, says Pagcor
House energy committee chair Arroyo bats for cheap electricity
Metro Manila now at moderate risk for COVID-19 — DOH
MOST READ
Robredo supporter tackles elephant in room: No massive fraud in 2022 polls, surveys were just right
Comelec invalidates win of sitting governor in Negros Oriental
DepEd: We are in a crisis situation in education sector
Lives destroyed as armyworms invade Philippine ‘onion capital’
Don't miss out on the latest news and information.