The Senate will not approve any plans to cancel the 2019 midterm elections, Senator Grace Poe asserted on Thursday as she opposed the “no-election” scenario House Speaker Pantaleon Alvarez has floated.

In a television interview, Poe said any move to shortcut the proposed shift to a federal form of government would not be accepted by the public.

“The Constitution specifically states when we are going to have the elections and 2019 is certainly an election year. You can probably amend the Constitution but even if you do, you need the Senate vote,” Poe said amid the administration’s keen push for federalism.

Alvarez has floated the idea of a no-election scenario, saying that scrapping the May 2019 polls would be practical to pave the way for a smooth course for federalism.

READ: Alvarez: ‘No-el’ in 2019 practical to speed up federal shift 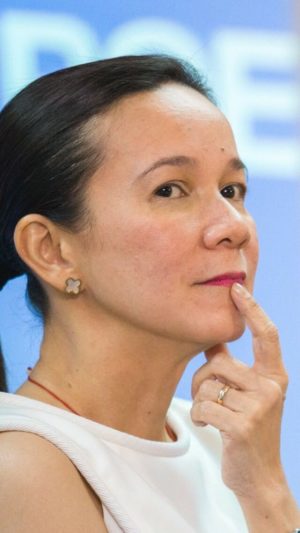 Photo from the office of Senator Grace Poe

Poe maintained that Alvarez has to deal with Senate first before any postponement of polls could happen.

“I don’t think so [Senate accepting] and the public should not accept this… Pero hindi nila talaga puwedeng gawing no election,” the senator said.

The lawmaker reminded the House leader that Congress is bicameral in nature and the House, in the lawmaking process, cannot pass a bill by itself and needs the Senate’s vote.

“Something as crucial as this, you are voting jointly? I don’t think that is the intention of the framers (of the 1987 Constitution),” she said.

Asked if she was wary that Congress, led by administration allies in the House, will convert itself into a constituent assembly to vote on the draft Charter during the President’s State of the Nation Address, Poe had this to say:

“What message are they trying to send? Kung gagawin nila iyon, halatang-halata sa taumbayan na may ginagawa silang kalokohan. Bakit nila idadaan doon? If they really believe in their proposed Charter, why would they pull these kinds of stunts?”

Read Next
TRAFFIC ADVISORY: July 14-15 road closures in Manila for INC event
EDITORS' PICK
When skincare meets makeup: Introducing the BYS Cosmetics Full Coverage line
Mallorca City: Home of Cavite’s finest industrial hub
Last mile: Honda workers fight for a dignified ending
Duterte to ABS-CBN: Apology accepted but franchise up to House
World ‘not ready,’ WHO exec warns as virus surges in more countries
Here’s How Protein and Calcium Deficiency Can Affect Your Kid’s Health
MOST READ
If PH can’t be self-reliant, choose: Be a US territory or China’s province – Duterte
BREAKING: Duterte: ‘I accept the apology’ of ABS-CBN
Pacquiao shrugs off Cayetano’s insults: I’m not ‘epal,’ ‘sipsip’
Last mile: Honda workers fight for a dignified ending
Don't miss out on the latest news and information.