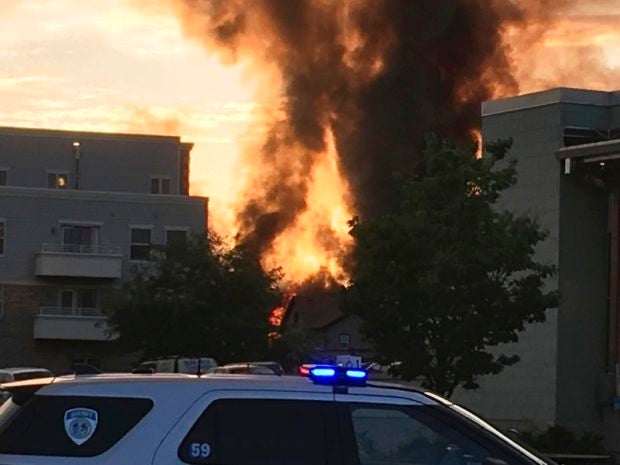 A large plume of smoke from a massive fire is seen in Sun Prairie, Wis., Tuesday, July 10, 2018. Witnesses said the fire broke out after a loud boom Tuesday night shook the community. Police blocked off downtown streets from traffic and onlookers. (AP Photo/Todd Richmond)

SUN PRAIRIE, Wis. (AP) — An explosion rocked the downtown area of a suburb of Madison after a contractor struck a natural gas main on Tuesday, injuring at least two firefighters and a police officer, authorities said.

No deaths were immediately reported, and it wasn’t known if anyone else was hurt.

Police Lt. Kevin Konopacki said that around 6:20 p.m., firefighters and police responded to a reported gas leak in downtown Sun Prairie, a community of about 30,000. Witnesses reported the powerful blast about 7:15 p.m. It sent a plume of smoke and flames into the air.

Konopacki said the firefighters and officer were taken to a hospital. He said he didn’t know if anyone else was hurt.

WE Energies spokeswoman Cathy Schulze said a contractor hit a gas main ahead of “a possible explosion.” She said the utility’s first responders were in the area working to shut off the flow of gas and make the area safe.

Dane County Sheriff’s Office operations manager Paul Logan said some people were taken to hospitals, but that no deaths had been reported. Logan said the sheriff’s office evacuated its communications center. He had no other details.

Firefighters from Sun Prairie and surrounding communities responded to the scene. Police blocked off downtown streets from traffic and onlookers. The area has several businesses including bars and restaurants.

Steve Owen, 60, who owns Sun City Cyclery and Skates in downtown Sun Prairie, said he saw firefighters and police officers on the street and then the explosion happened. He said the building across from his shop “literally lifted up.”

He said the force of the blast knocked him back in his chair and that he ran outside and saw a ball of fire.

“People were scrambling,” said Owen, who lives above his shop.

Jill Thompson, 56, who lives about two blocks from where the blast occurred, said, “It shook the whole building. I thought someone had hit the building with their vehicle. We seen the smoke immediately.”

The area is about half a block from the town’s city hall.  /kga