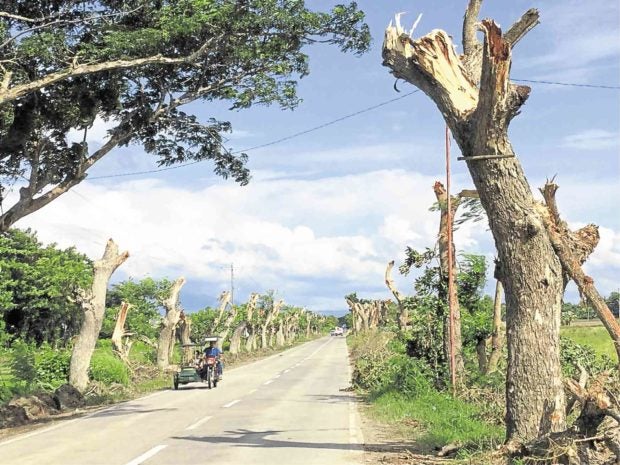 BACOLOD CITY — The cutting of trees on Abuanan Road in Bago City has been stopped and charges will be filed against those responsible for pruning them even before getting a permit from the Department of Environment and Natural Resources (DENR), a community environment and natural resources officer said on Tuesday.

Joan Nathaniel Gerangaya said he had ordered the recovery of tree parts and was completing documentation so an administrative hearing could be held before the filing of charges in court.

Cutting of trees without permit violates the forestry code, he said.

A Department of Public Works and Highways (DPWH) contractor reportedly pruned the trees in preparation for their removal to allow the widening of Abuanan Road to four lanes to connect it with the Bacolod economic highway.

An application for clearance to cut 271 trees on Abuanan Road had been filed but the DENR regional office had yet to approve it, said Freddie Bata-anon, head of the licensing, patents and bids section of the city environment and natural resources office (Cenro) in Bago.

The Cenro on Saturday ordered the DPWH to stop pruning and cutting the trees.

When permission to cut is granted, Cenro representatives need to be present to ensure it is properly done and an inventory can be made, Gerangaya said. The cut trees are then donated to the Department of Education for use in schools, he said.

Of the 271 trees to be cut, more than 100 acacia trees were planted 31 years ago by volunteers of the Organization for Industrial, Spiritual and Cultural Advancement as a symbol of friendship between the Japanese and Filipinos.

An online signature campaign was launched to ask the DENR not to allow the DPWH to cut the 271 trees. On Tuesday, 3,021 had signed the petition. —Carla Gomez