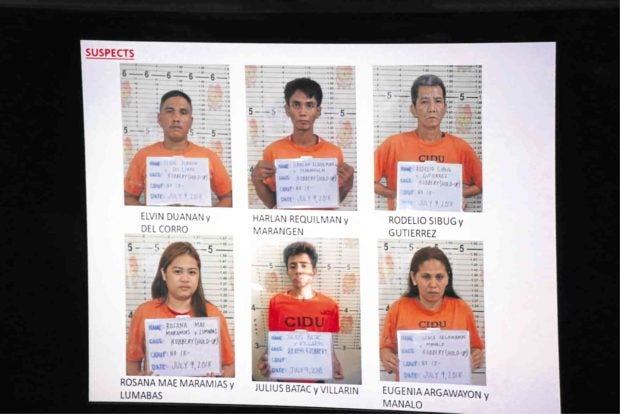 The alleged leader and five members of the Batac robbery group—linked by the police to at least 100 “basag kotse” cases in Metro Manila—were arrested on Monday evening.

Maramias, who was two months pregnant, and Argawayon were the live-in partners of Batac and Duanan, respectively. Both served as spotters for the group.

Senior Insp. Allan dela Cruz, head of the Quezon City police’s theft and robbery section, said the suspects were behind at least 100 cases of car break-ins in Metro Manila.

Although Batac admitted his involvement, he said that the 100 cases being attributed to him were too many. He said he started breaking into cars and stealing valuables when he was just 12 years old because many of his neighbors were doing the same thing.

The group’s last victim was Benson Bong Paras, a barangay official, who said three men on motorcycles robbed him on Katipunan Avenue on Sunday night after he accosted one of them for attempting to break his car window. —WITH REPORTS FROM SAMMY WESTFALL AND ALIANA LOIS DIAZ