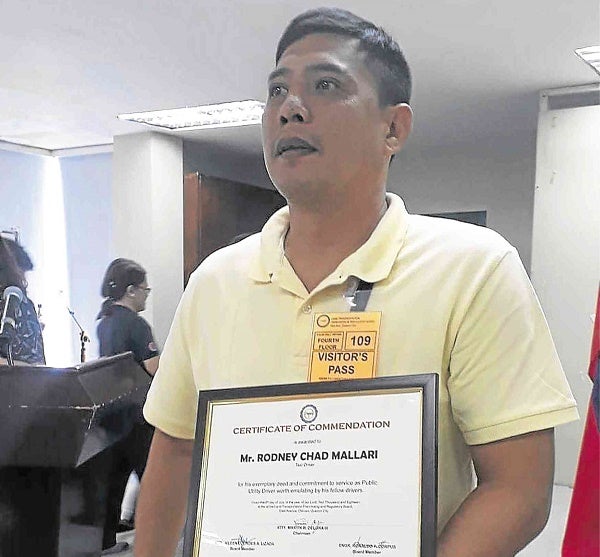 Despite being in need of money himself, airport taxi driver Rodney Chad Mallari did not think twice about returning P200,000 worth of cash and valuables his passenger left behind in his cab.

For his “exemplary deed and commitment to service as [a public utility vehicle] driver worth emulating by fellow drivers,” Mallari was lauded on Monday by the Land Transportation Franchising and Regulatory Board (LTFRB).

Mallari was on his way home on July 3 when he noticed a black pouch in the back seat of his taxi cab. It contained P50,000 and $2,000 in cash, identification cards, credit cards and an iPhone 8.

Mallari said he immediately recognized the passenger when he saw the identification cards, prompting him to go back to Ninoy Aquino International Airport (Naia) Terminal 2 to report his find.

The pouch belonged to Belen Zoza Swegler, a 66-year-old American citizen who rode in Mallari’s taxi from the airport to her hotel in Pasay City. Upon realizing she had left her pouch in the cab, Swegler also went back to Naia to look for the driver.

“Anyone who makes such a find will probably think twice especially with life so hard nowadays. The thought [of keeping the pouch] crossed my mind because I also need money. But I was not raised that way. I also thought that maybe [the owner] really needed the money,” Mallari said.

He added that rising prices of fuel and basic goods due to the new tax law had been an additional burden to taxi drivers like him, slashing by around P300 to P400 his average daily earnings of P800 to P1,000. —WITH A REPORT FROM KRISTEL LIMPOT