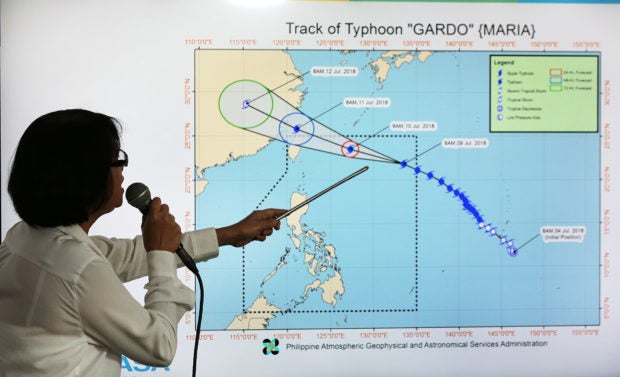 Local officials called off school at all levels on Sunday night in expectation of heavy rain and extensive flooding on Monday, but sunny weather greeted Filipinos in the morning as the typhoon that threatened Luzon weakened after entering the Philippine area of responsibility (PAR) and having a “gender change.”

Meteorologists blamed the confusion on “inaccurate information” on social media that described the approaching weather disturbance as a super typhoon.

It should be just typhoon, they said, though they did not explain why “Maria” became male, named “Gardo,” after it crossed into the PAR.

“We urge the public to verify every piece of information that comes their way, especially those they get from social media, with our forecast on our website and make sure that what they are getting is not fake news,” said Esperanza Cayanan, chief of the weather division of the Philippine Atmospheric, Geophysical and Astronomical Services Administration (Pagasa).

Reports of Supertyphoon Maria speeding into Philippine territory late Sunday prompted local authorities to order schools shut on Monday in Metro Manila and some parts of central and northern Luzon.

Heavy rain struck parts of northern Luzon, including Baguio City, on Sunday afternoon and into the night.

The mayors of Bayambang, Urbiztondo and Mangaldan towns in Pangasinan province ordered the suspension of Monday classes, from preschool to high school.

No threat to land

Though it posed no threat to land, Maria was reported likely to intensify rain-bearing monsoon blowing from the sea off western Philippines.

Weather reports warned of heavy rains, which Cayanan said may have been the basis of the shutdown order.

“[W]e are not saying what they did was wrong. As you can see, the skies are [darkening] so there must have been a basis for the suspension,” Cayanan said.

But it was bright and shiny in Metro Manila and the rest of Luzon, though heavy monsoon rain drenched Iloilo and Bacolod cities in the Visayas.

As of 3 p.m. on Monday, Gardo was centered at 1,120 kilometers east-northeast of Basco, Batanes province, with maximum sustained winds of 185 kph and gustiness of up to 225 kph.

The typhoon skimmed the northeastern corner of the PAR and moved west-northwest over the Philippine Sea.

By Tuesday morning, Gardo would have been at 645 km east-northeast of Basco.

It is expected to exit the PAR by Wednesday morning, Pagasa said.

Gardo’s pull on the monsoon will bring rains in Mimaropa and Western Visayas regions and occasional rains in Metro Manila, Calabarzon and Bicol regions, as well as the provinces of Zambales, Bataan and Aurora on Tuesday.

Monsoon rains may affect most of Luzon, especially the western part of the island, beginning on Wednesday, Pagasa said. —Reports from Melvin Gascon, Gabriel Cardinoza and Nestor P. Burgos Jr.