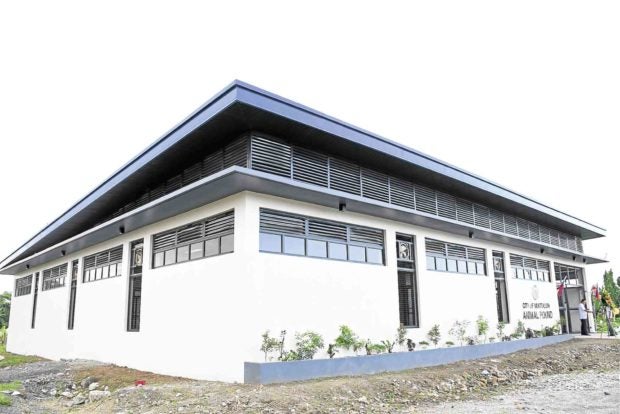 Metro Manila, with its polluted air and perilous roads, is far from the ideal haven for lost and abandoned animals.

But in the southern part of the metropolis, a new taxpayer-funded facility billed as a “state-of-the-art” animal pound could serve as a template for other local governments looking to treat strays humanely.

In a ceremony held on July 4, the Muntinlupa Animal Pound (MAP) was opened to the public, a 405-square-meter facility built at Barangay Tunasan at a cost of over P9.3 million. Operated by the City Veterinary Office, it was the first of its kind in Metro Manila, Muntinlupa public information officer Tez Valencia-Navarro told the Inquirer on Sunday.

The pound is equipped with six kennel cages, 35 single cages, separate rooms for surgery, euthanasia and storage, and a foyer for clients waiting to be serviced.

During the inauguration, Mayor Jaime Fresnedi lauded Muntinlupa residents for their “timely remittance of taxes” which helped pave the way for the project.

Also in attendance was Bureau of Animal Industry official Minnie Lopez who was hopeful that MAP would “serve as a model facility to local government units in the country.”

In an effort to erase the notion of a pound as simply another cruel limbo for abandoned animals, the Muntinlupa City government said in a statement that it would promote “the care and well-being of abandoned, abused and neglected animals, and the health and safety of the human community.”

Dr. Pam Hernandez, city veterinarian, said MAP’s focus would be on rehabilitating the animals and preparing them for adoption, or if not, training them to assist in the government’s search-and-rescue operations.

In a post on Facebook, the city veterinarian office described the pound as “clean, big, spacious, bright and vast.”

“The best part is they are given dog food, and will be abundant not only in food but in water and care, including being given antirabies vaccine,” it added.

Several residents and animal welfare advocates who commented on the post asked if it would be MAP’s policy to euthanize animals that were not adopted.

The veterinarian’s office assured them that there “would be none of that here.”

It also said the pound would help enforce City Ordinance 17-080 which was passed last year, regulating pet ownership in the city and penalizing former caretakers of stray cats and dogs.

According to the ordinance, residents who lose their pets or allow them to roam the streets unattended must pay a fine of around P1,000 in order to retrieve them from the city pound.

Additional penalties will be imposed if the pet is unregistered or unvaccinated.

In an interview with the Inquirer, Hernandez said there were already nine dogs in MAP less than a week after its opening.

Many of these were brought in by residents who claimed that these were abandoned by neighbors who had moved out, she added.

Hernandez said that owners would be given three days to redeem their pets, after which they would be put up for adoption.

But contrary to replies on MAP’s Facebook page, she added that unadopted pets “[would] be put to sleep.”

“We cannot let them stay for a long time because the area is limited,” said Hernandez, who stressed that despite its focus on rehabilitation, the facility was a pound and “not a shelter.”

She said they would try as much as possible to avoid this by aggressively promoting their adoption services to Muntinlupa residents, in addition to hosting “adoption days.”