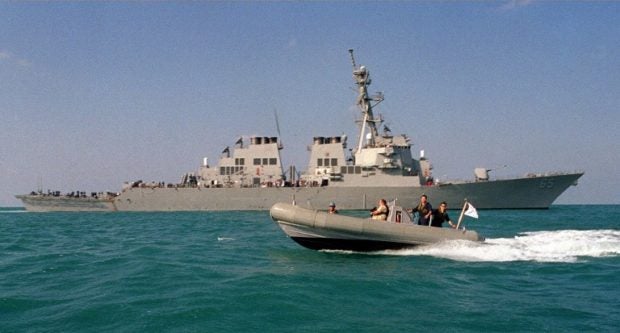 A Rigid Hull Inflatable Boat (RHIB) makes a pass by the U.S. Navy destroyer USS Benfold. The Benfold and another destroyer, USS Mustin, entered the Taiwan Strait on Saturday, July 7, 2018,  as tensions between Washington and Beijing soared. AFP FILE

“The military is monitoring the situation in neighboring areas, and has the confidence and abilities to maintain regional stability and defend national security,” it said in a statement.

A defense ministry official told AFP the ships were still in the strait on Saturday night, sailing in what he described as international waters.

US Pacific Fleet spokesperson Captain Charlie Brown confirmed two vessels were transiting through the strait but played down the significance of the maneuver.

“US Navy ships transit between the South China Sea and East China Sea via the Taiwan Strait and have done so for many years,” he told AFP.

But the warships’ entry into the strait comes as Washington and Beijing are locked in a trade war and as tensions escalate between Beijing and Taipei.

US President Donald Trump on Friday rolled out 25 percent tariffs on $34 billion of Chinese goods in what Beijing called the “largest trade war” in economic history.

China said it was hitting back with retaliatory measures on US goods but did not immediately provide precise details.

China sees self-ruling democratic Taiwan as part of its territory to be reunified, by force if necessary, but the island regards itself as a sovereign country.

Although the US does not have official diplomatic relations with Taiwan, it is its most powerful ally and biggest arms supplier.

China has stepped up diplomatic and military pressure on Taiwan since Beijing-sceptic President Tsai Ing-wen took office two years ago as her government refuses to acknowledge that the island is part of “one China.”

Beijing has staged a string of military exercises, including a live-fire drill in the Taiwan Strait in April, which it said were aimed at Taiwan’s “independence forces”.

It has lured away four of Taiwan’s diplomatic allies since Tsai came to power, leaving only 18 countries in the world that recognize Taipei over Beijing.

A growing number of international airlines and companies were also forced to change Taiwan’s name to “Taiwan, China” or “Chinese Taipei” due to pressure from Beijing.

Tsai has criticized China for attempting to change the status quo between the two sides and urged the world to “constrain” its ambitions.

Beijing is also incensed by the recent warming relations between the US and Taiwan, after Trump signed legislation paving the way for mutual visits by top officials and the US government approved a license required to sell submarine technology to Taiwan. /cbb

Read Next
12 nabbed in Laguna, Cavite drug ops
EDITORS' PICK
Timeless Elegance in the Philippines’ Most Distinguished Home Kitchens
James Reid, Nadine Lustre confirm split
Pilot test of motorcycle taxis may be ended early
Asean accepts Trump invite to US meet
What exactly did Vilma Bautista — Imelda’s ex-aide — do?
‘A greener, cleaner tomorrow’: A how-to guide for Filipinos who want to help with today’s energy crisis
MOST READ
Taal Volcano and surroundings have become ‘inflated’
Ayala Land bares facts on Technohub deal: P4B in lease to UP
If Marcos runs in 2022 polls, he must accept results – Robredo
Duterte legacy: Chinese criminals
Don't miss out on the latest news and information.