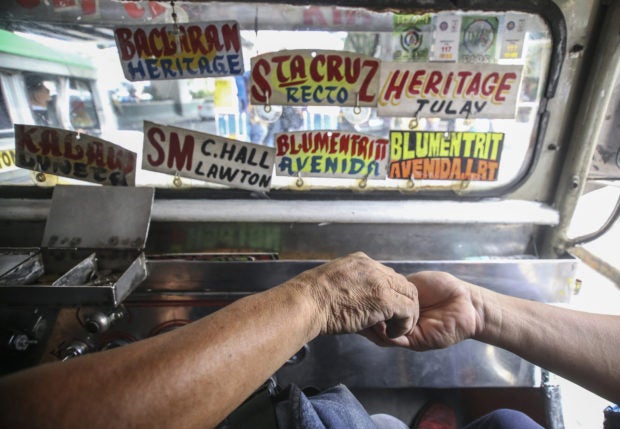 A jeepney driver give the passenger a change after paying bigger amount for the fare at Taft avenue, Manila on Thursday. The LTFRB is expected to implement the 1 peso jeepney fare hike on Thursday afternoon. PHOTO BY EARVIN PERIAS

Instead of listening to drivers’ and operators’ suggestions on how to deal with rising fuel prices, the government dumped the problem on commuters by allowing an increase in fares, the leader of the country’s largest transport group said on Thursday.

The Land Transportation Franchising and Regulatory Board (LTFRB) approved on Wednesday night a P1 provisional increase on the minimum fare for jeepneys plying routes in Metro Manila, Central Luzon and Calabarzon.

Once the LTFRB order is signed — expected late Thursday — jeepneys could charge P9 for the first 4 kilometers.

The current minimum fare is P8.

The public as scapegoat

“It’s sad, because they treated the commuters like a scapegoat,” he said.

San Mateo said Piston had suggested to the government to suspend the enforcement of the Tax Reform for Acceleration and Inclusion (TRAIN) Act to lower fuel prices and avoid a raise in fares.

“The problem is, the government does not want to listen. There are many possible solutions and suspending the enforcement of the TRAIN law is one of them. It is really the cause of the people’s present economic difficulties,” he said.

The TRAIN law took effect on Jan. 1. It raised the ceiling on tax-exempt income but imposed higher taxes on oil products and other goods, amplifying the effects of firmer global oil prices in recent months.

A chain reaction triggered by the enforcement of the law pushed inflation to 5.2 percent in June, the fastest in more than five months.

San Mateo appealed to commuters not to blame jeepney drivers for the fare hike.

“Let’s not blame the jeepney drivers. Blame this on the government’s policies,” he said.

“As if the people aren’t already spending too much because of TRAIN,” said University of Santo Tomas literature major Celine Garcia.

“I enjoy student discounts and the fare hike means I have to pay P8 now. Every peso counts,” she said.

Nicolas Celo, a junior high school student, expressed dismay at the fare hike, which would affect his daily allowance.

But he conceded that jeepney drivers were burdened with high fuel prices.

“We also need to buckle down [for them],” he said.

Innah Pardinan, who works in advertising and commutes between Manila and Quezon City every day, said the jeepney fare hike might force her to consider other options, like the UV Express, which costs a few pesos more but is more convenient. — WITH A REPORT FROM JULIE M. AURELIO