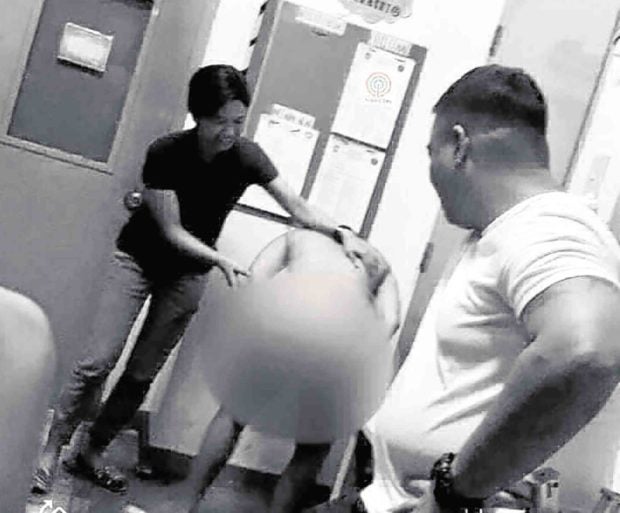 THEY CAN’T LAUGH NOW The now viral video of this scene is spelling trouble for some members of the Makati police antidrug unit, more than a year after it was taken.

Four Makati City police officers who were caught on video laughing as they forced a woman to strip and bend down were relieved of their posts to face administrative charges, as the Commission on Human Rights (CHR) condemned their actions and the Philippine National Police chief denounced their “deviant behavior.”

The now viral cell phone video was reportedly taken in March 2017 and was given by a former antidrug operative to ABS-CBN, which aired it on Wednesday. The Makati police confirmed that the recording took place at the office of their Station Drug Enforcement Unit (SDEU), and that it showed four of their personnel, namely Police Officers 1 Stephanie Limhap, Heizelle Maramag, Francis Intia, and the SDEU head, Senior Insp. Valmark Funelas.

According to Chief Supt. Guillermo Eleazar, director of National Capital Region Police Office (NCRPO), the officers admitted that they strip-searched the woman but claimed she had been paid to participate in a “demonstration” on how to look for concealed drugs.

The woman, whom Eleazar said was a “guest relations officer” from a local nightspot, appeared at a press conference on Thursday and said she was indeed paid P2,000 to play the role of an arrested drug courier.

But she said the officers violated their agreement when they secretly video-recorded the supposed demo. “They’re just too much; what they did to me was unfair. They ruined my life,” said the woman, who covered her face during the briefing.

“Her privacy was violated. That’s what made her furious,” Senior Supt. Rogelio Simon, Makati police chief, told the Inquirer later in an interview. “The deal was that she would be strip-searched but no videos, no cell phones would be involved.”

The woman had expressed an intention to file criminal charges against the still-unidentified officer who took the video, Simon added.

Simon said the demo was done for a batch of female operatives who were then newly assigned to the SDEU, and that the woman who appeared in the video was approached by the police for the job because she was a friend of one of the SDEU’s assets.

According to Eleazar, however, even if the woman had consented to be stripped naked and searched, there were still “several violations of our standard operating procedures.”

Men in the room

The four relieved officers would be facing administrative charges to be determined in a precharge investigation, Eleazar added.

Simon recalled that Funelas, the SDEU chief, was relieved of his post last year but later reinstated as the unit’s officer in charge after his replacement went on academic leave.

Meanwhile, Philippine National Police Director General Oscar Albayalde said the “full force of the law” would be applied on the matter. “Let me state this clearly: We strongly condemn this kind of deviant behavior in our ranks.”

Earlier on Thursday, CHR Commissioner Gwendolyn Pimentel-Gana issued a statement expressing alarm over the video. The statement, however, was still based on initial media reports describing the woman in the clip as a real “drug suspect.”

“It is alarming that, even after we have passed a law against torture, incidents such as this continues to happen in closed quarters, especially that police officers are involved,” Gana said. “We urge the PNP to open a transparent investigation on the case, where perpetrators will be accountable beyond mere suspension from their duty for possibly violating Republic Act 9745, Section 4, on acts of torture.” —WITH A REPORT FROM MELVIN GASCON