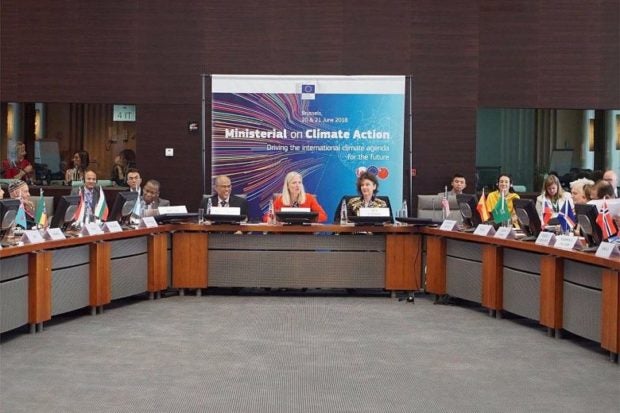 Minister for the Environment and Water Resources Masagos Zulkifli, seated with Canada’s Minister of Environment and Climate Change Catherine McKenna (in red) at last month’s Ministerial on Climate Action.PHOTO BY MASAGOS ZULKIFLI/FACEBOOK

WASHINGTON — The latest indications of the success of human efforts to dial back climate change are not promising.

Arctic ice is melting, but in a large “hot spot”, it is melting at an even faster rate, according to a new study published in the journal Nature.

In the northern Barents Sea, surface warming and loss of sea ice in winter are the most rapid in the Arctic region.

Separately, last month, Reuters reported on a leaked United Nations report to be released later this year, which said the international community looks like it is falling short of the more ambitious targets for greenhouse gas emissions set by the 2015 Paris Agreement.

“If emissions continue at their present rate, human-induced warming will exceed 1.5 deg C by around 2040,” the report said.

This will lower the prospects of economic growth, it noted, warning of, among other things, floods, droughts and heat waves undermining agriculture.

Last week, a World Bank report warned: “More than 800 million people in South Asia currently live in communities that are projected to become hot spots under a carbon-intensive climate scenario.”

This would severely affect livelihoods, said the World Bank.

These are just three among a flurry of reports delivering grim news on global warming, just as the United States’ notice of withdrawal from the Paris Agreement has left it without the influence at international forums to coax and marshal international consensus.

But while the US federal government has taken a back seat at international climate change meetings, European countries and China have been stepping up to fill the breach.

Their leadership was on display last month, when the European Union raised its target for the amount of energy it consumes from renewable sources to 32 per cent, from the previous goal of 27 percent, by 2030.

And in Brussels, 36 countries at the second Ministerial on Climate Action convened by the EU from June 20 to 21, which included Canada and China, confirmed that the Paris Agreement is irreversible and not to be renegotiated, stressing the importance of multilateralism.

Singapore also attended the meeting. “This is what multilateralism looks like,” tweeted Canada’s Minister of Environment and Climate Change Catherine McKenna.

“Very proud that Canada is leading ambitious #climateaction on the international stage with China and the EU.”

However, it is not all bad news in the US, the largest economy in the world. From being an advocate, the US is playing a more neutral role globally on climate issues now.

It is possible that despite its decision to withdraw from the Paris Agreement, it might still meet its emissions reduction commitment.

While the federal government no longer leads on climate change, there is still a lot of work going on at the sub-national level.

“That the federal government isn’t leading means it’s not working to reduce its own emissions, either from energy on federal land or other federal activities,” Ms Sherri Goodman, a senior fellow at the Wilson Centre’s Environmental Change and Security Program and Polar Initiative, told The Straits Times.

“But businesses are operating in a multinational environment, and they know they need to continue to bring emissions down to be globally competitive.”

The goal of the Paris Agreement, adopted by almost 200 countries, is to limit global warming to “well below” a rise of 2 deg C above pre-industrial times, while “pursuing efforts” for a tougher 1.5 deg C goal.

Emissions are to peak in 2020, after which countries are to limit their individual emissions in voluntary Nationally Determined Contributions or NDCs.

“The question is how will we all ramp up ambition globally to get below 2, closer to 1.5,” said Mr Jo Scheuer, director of Climate Change and Disaster Risk Reduction at the UN Development Programme.

“There is a question mark, of course, as to what the commitments of the US and other countries will be to get us there.”

“As more and more people around the world experience extreme and disruptive weather events because of warmer ocean and air temperatures that are driving intense storms… (and) the melting of the Arctic that’s bringing adverse weather conditions down here in the US, more and more are becoming aware that we need to become resilient today,” she said.

“We can’t wait till tomorrow.”