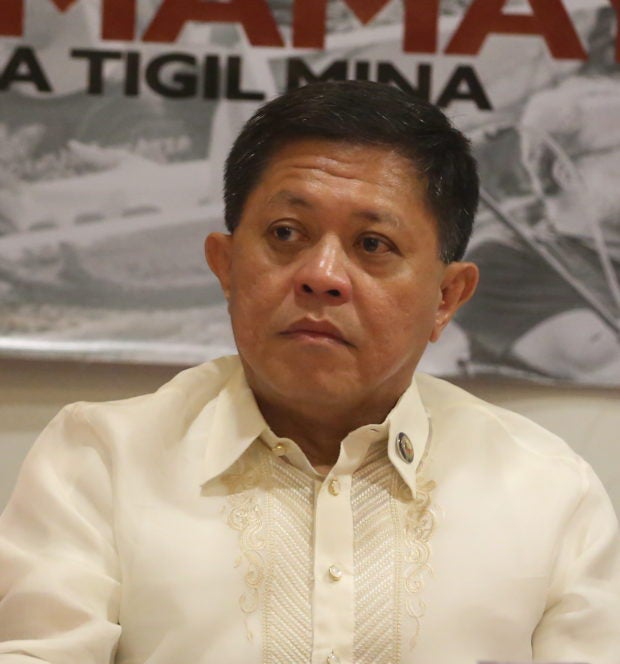 Akbayan Rep. Tom Villarin on Wednesday blamed the deadly attacks on two local officials this week on President Rodrigo Duterte who, he said, inspired disrespect for the rule of law by promising protection to police who would kill drug users and dealers.

According to the opposition lawmaker, the shooting deaths of the mayors of Tanauan City, Batangas province, and General Tinio, Nueva Ecija province, showed that once the rule of law is abandoned, “anybody with a gun and a grudge has a license to kill people without worrying about the consequences.”

He said the President himself gave the license to kill by repeatedly assuring police and soldiers that they would not be prosecuted for carrying out his brutal war on drugs.

A sniper felled Mayor Antonio Halili during flag-raising rites in front of City Hall in Tanauan on Monday morning. Halili didn’t make it alive to hospital.

On Tuesday afternoon, two motorcycle-riding men pumped five bullets into General Tinio Mayor Ferdinand Bote as he was being driven out of the National Irrigation Administration (NIA) compound in Cabanatuan City.

Bote was taken to the hospital across the street from the NIA compound but he was already dead when he got there, according to the police.

Bote was not on that list. Police said they were looking at politics and business in their investigation of his slaying.

The killings have worsened Filipinos’ sense of insecurity, Villarin said.

“Duterte’s attack against institutions upholding the rule of law has led to a weakened state and a population desperate for security thereby pushing everyone to bad decisions culminating [in] a vicious cycle of violence that destroys society,” he said.

Presidential spokesperson Harry Roque denied there was a culture of impunity in the country.

“We continue to adhere to the rule of law and consider the recent killings of high-profile figures an attempt to erode confidence in the President, whose main platform of governance rests on fighting crimes,” Roque said in a statement.

He gave assurance that the police were “sparing no effort to find and capture the killers of the two slain mayors.”

Gabriela Rep. Emmi de Jesus condemned the killings and called for a thorough and impartial investigation.

“A thorough and impartial investigation is needed and hope these cases would not be just another contribution to the worsening culture of impunity,” De Jesus said.

Vice President Leni Robredo appealed to the police to investigate the killings and take steps to prevent further bloodshed.

“It’s as if no one is spared, from priests to civil servants and government officials, to loiterers and the youth,” Robredo said.

“Are we going to allow violence to finally reign in our country?” she said.

Opposition Sen. Francis Pangilinan said the killings could be used by the Duterte administration as grounds for the imposition of martial law on the entire country.

Mindanao remains under martial law in the aftermath of a terrorist occupation of Marawi City last year.

Pangilinan, president of the Liberal Party, said he would not discount the possibility of the Duterte administration using the assassinations of Halili and Bote and other recent high-profile killings as grounds for expanding military rule throughout the country.

“I wouldn’t be surprised if such a scenario unfolds, with the majority in Congress endorsing it,” Pangilinan said in a text message.

“After the bizarre quo warranto decision ousting [Chief Justice Maria Lourdes] Sereno, any and all official acts of this administration can be legally justified by the Supreme Court using twisted and witless legal reasoning,” he added.

“The only recourse now is to work toward forging and mobilizing a broad unity among our citizens in defense of our democratic rights, our sovereignty and the rule of law,” he said.

Sen. Nancy Binay said the killings of Halili and Bote should not be considered isolated cases, but should be seen as a “systemic failure” of law enforcement.

But Sen. Panfilo Lacson, a former Philippine National Police chief, told reporters that the Philippines had not yet reached the point of law and order breakdown.

“But I fear that we may reach that if the PNP does not initiate control measures,” Lacson said.

Lacson said he did not agree with suggestions that the President’s incendiary rhetoric had triggered the killings.

“No, I don’t think so. Especially in local politics, political battles are so fierce, they resort to killing each other. But it is incumbent upon the PNP to do something about it. How? Control the movement of firearms,” he said. —With reports from Christine O. Avendaño, Vince F. Nonato and DJ Yap