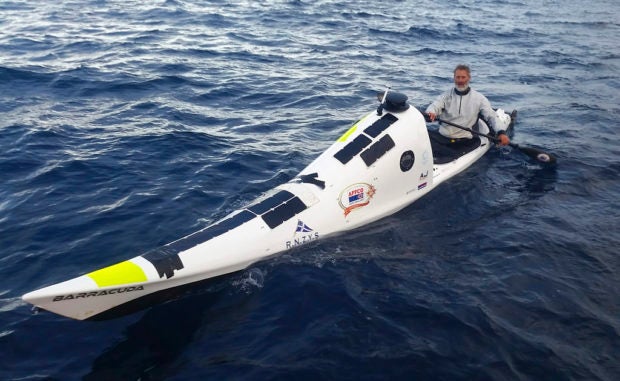 In this June 30, 2018 photo provided by Tasman Kayak, Scott Donaldson paddles his kayak in the Tasman Sea. Donaldson has become the first person to kayak solo across the Tasman Sea after arriving at the New Zealand town of New Plymouth on July 2, 2018, two months after leaving from Coffs Harbour on Australia’s east coast. (Tasman Kayak via AP)

WELLINGTON, New Zealand  — A New Zealand man on Monday became the first person to kayak solo across the daunting stretch of water that separates New Zealand from Australia.

Scott Donaldson looked weary and a little bedraggled when he raised his arms in jubilation after making landfall at the New Zealand town of New Plymouth, exactly two months after leaving from Coffs Harbour on Australia’s east coast.

The 48-year-old was helped by supporters up a beach, where dozens of people had gathered and waited for hours for him to arrive.

“I’ve got no words at the moment,” Donaldson told them. “That was kind of epic.”

He said his final few hours were “fantastic” because he was able to see the land ahead and the lights of civilization. He added that he needed a shower, before being processed by border control officials.

The 2,100-kilometer (1,300-mile) passage across the Tasman Sea is regularly hit by fierce storms.

A 2007 crossing attempt by Australian adventurer Andrew McAuley ended in tragedy when McAuley disappeared while within sight of the New Zealand coast. Video footage McAuley had taken of his journey was later recovered and became the basis for a book and a documentary.

Donaldson was forced to abandon a previous attempt in 2014 when he was within sight of the New Zealand coastline after he was hit by a storm.

But this time he was able to complete the journey after surviving a lightning storm and at one point coming close to a large and “frisky” shark. His modified kayak was made from carbon fiber and had a small cabin.

“On a good day, you’re paddling for 16 hours,” Donaldson told reporters. “On a bad day, you’re stuck in the cabin. And on a worse day, you’re going backward.”
Donaldson said his arrival was giving him sensory overload.

“I’ve seen water for the last, I don’t know how many days it was, and that’s all you see,” he said. “A couple of birds, some fish, but it’s just water.”

“There are some accomplishments that are difficult to fathom — like crossing the Tasman solo in a kayak,” she wrote. “I’m pretty sure Scott Donaldson has stunned us all. Truly amazing.”

Donaldson said there was an upside to being alone on the ocean without any screens or other worldly distractions: “It’s very pure.” /ee