Albayalde: PNP has not stopped probe into killing of Fr. Richmond Nilo 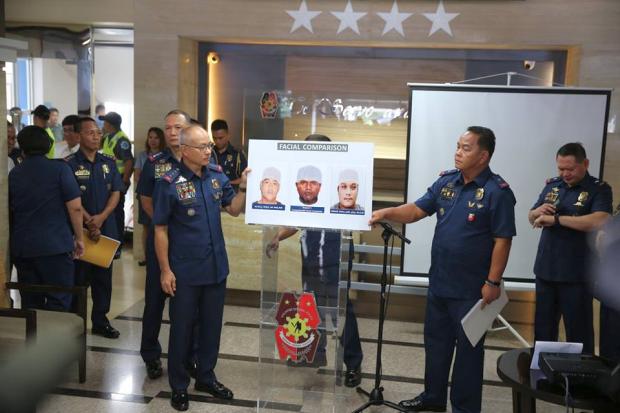 Director General Oscar Albayalde (left), PNP chief, and Chief Supt. Amador Corpus, chief of PRO3, show photos of some of the suspects in the killing of Fr. Richmond Nilo at a press conference on Monday, July 2, 2018, in Camp Crame in Quezon City. (Photo from the PNP Facebook page)

The investigation into the killing of Fr. Richmond Nilo has not stopped despite the arrest of a suspect, according to Director General Oscar Albayalde, chief of the Philippine National Police (PNP)

“Actually this is one commendable act of the Philippine National Police because from the very start we did not stop with the investigation despite the fact [somebody has already pointed to a] suspect,” Albayalde said on Monday at a press briefing in Camp Crame, where the suspects were identified.

“We could have stopped with our investigation,” Albayalde said, noting that the police already have a suspect in custody. “We could have stuck with the statement of the sacristan.”

But he added: “We did not stop with the investigation because we feel that there are still people involved.”

According to an earlier report, Mallari and Garcia executed sworn affidavits pointing to Torres as the financier of the job, promising them a pay of P100,000 if they would kill Nilo.

Albayalde also played down claims of covering up the case by providing a fall guy.

“It’s not us who gave the mistaken identity. It’s the altar boy,” he said. “We are not at fault here, because we have no control over the altar boy.”

The police head explained that PNP’s filing of a case against Adell Roll Milan was based on the testimony of the altar boy, leaving it to the courts to decide on the merits of the case.

“The PNP could not deny [the altar boy’s] statement,” Albayalde said. “So we filed a case, and it is up to the appreciation of the prosecutor of the court. That’s why he accepted the case.“

Nilo was killed on June 11 inside the Nueva Señora de la Nieve Chapel in Zaragoza, Nueva Ecija, as he was about to start Mass. /atm

READ: Priest shot dead in chapel at start of Mass in Nueva Ecija