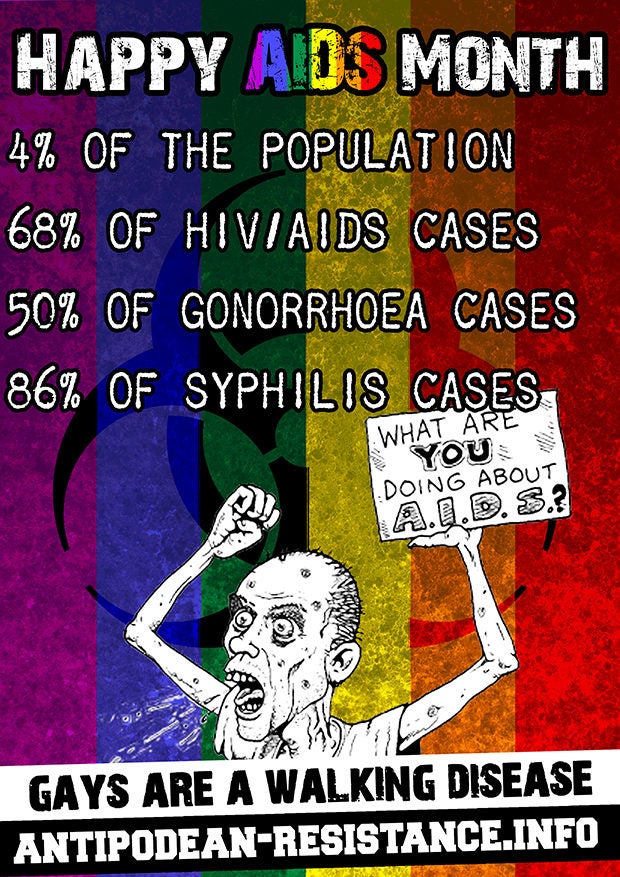 Homophobic posters by neo-Nazi youth group Antipodean Resistance shocked the people of Melbourne, Australia, when these were exposed last week, just in time for Pride Month.

The posters plastered along Prahran’s Chapel Street bear a rainbow background, a mockery of the LGBTQ community’s pride flag, as well as a caricature of a homosexual with its mouth opened, saliva spewing out, holding out a placard saying, “What are you doing about A.I.D.S.?”

“Happy AIDS Month” was written in the upper half of the poster while “Gays are a disease” was noted on the poster’s lower half. The neo-Nazi’s website is listed below the homophobic rhetoric.

It is worth noting that the timing for putting up the posters may have been intentional, as the LGBTQIA+’s Pride Month is celebrated on the month of June. The group also claims that the statistics mentioned on the posters — four percent of the population, 68 percent of HIV/AIDS cases, 50 percent of gonorrhea cases and 86 percent of Syphilis cases — were accurate, citing researches made by The New South Wales Ministry of Health (NSW Health), University of Wollongong, Roy Morgan Research and HIV Media Guide organization.

In protest, citizens have been sharing images of the posters in social media, as in the case of an activist-lawyer Paul Kidd who pointed it out on Twitter.

We may have won last years divisive an unnecessary postal vote on #marriageequality, but the hateful harvest of that time continues. Nazi group plasters Melbourne street with “Happy AIDS Month” posters https://t.co/EVBX8d8CyS pic.twitter.com/eXWqIOXxGk

“There should be no room in Victoria for such contempt and hatred by a neo-Nazi group which is determined to vilify our diverse and vibrant LGBTIQ community, and send a message of fear and intimidation. These kinds of deplorable attacks will certainly shake many to the core and warrant priority response from the police and government,” he said in the report.

“It is also a grim reminder that unchecked bigotry and incitement can ultimately lead to violence,” noted Abramovich. “Unfortunately, over the last few years, we have seen a surge in racist rhetoric and white-supremacist activity across our nation, and we call on all good people to stand together and to say that we can turn back this dangerous tide.”

Victoria Police is now conducting an investigation on the posters, said the report. They removed the anti-LGBTQIA+ posters and will be reviewing the CCTV footages in the area.

The Antipodean Resistance, formed in 2016, is said to be an “Australian National Socialist Youth Organization.” The neo-Nazi youth group sees Australia as “terminally ill,” arguing that “White revolution is the only solution.” The group has been responsible for putting up posters with racist and homophobic themes across Australia.

Antipodean Resistance only recruits healthy, white heterosexual Australian youth. The group is strongly against candidates who are of different skin color and are Jews. The group also has a strict no-tolerance policy on drug use, relationships with other races, promiscuity and adultery.

This group claims to cultivate “traditional values” among women by offering the supposed “antidote to the poison” that has been given to women by means of the “degeneracy of modern society.” Members of the branch engage in traditional activities for women including cooking, gardening and sewing. JB