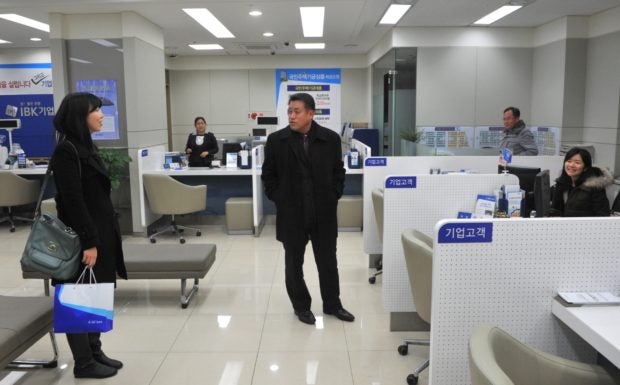 In a picture taken on January 15, 2013, Industrial Bank of Korea (IBK) employees leave the office after finishing work at 7:00 pm in Seoul. A growing number of South Korean corporations are turning their backs on a workaholic culture once seen as indispensable but increasingly viewed as unhealthy, unproductive and inefficient. Long working hours, often followed by intense late-night drinking sessions with the boss, have long been a feature of the Korea Inc. that transformed a war-ravaged nation into Asia’s fourth-biggest economy in a matter of decades. AFP PHOTO / KIM JAE-HWAN / AFP PHOTO / KIM JAE-HWAN

SEOUL — South Korea officially dropped its maximum workweek to 52 hours on Sunday, in an effort to improve the quality of life among its citizens by tackling the country’s notoriously long work hours.

The new law, which was a campaign promise by President Moon Jae-in, went into effect for businesses with more than 300 employees, state-run agencies and government offices starting Sunday.

Under the law, which slashed the maximum weekly work hours to 52 from 68, workers in Korea will be allowed to work 40 hours and an additional 12 hours of overtime.

Those who make their employees work more than 52 hours weekly now face up to two years in prison or a fine of up to 20 million won ($17,960).

“I’m delighted by the news,” said Shin Na-eun, 29, a Seoulite who runs her own business after quitting her job at a large-size firm two years ago.

“There were many reasons why I quit my job, which was seen as stable by many. One of the reasons was definitely the heavy workload.”

Shin said in her experience, no one really forced her to stay late in the office. Rather, it was her workload that made it impossible for her to leave work on time. She said the office was understaffed, and that she had to bring her work home on many occasions.

“I’m not naive enough to believe that this law will change everything overnight, but I feel like we are certainly going in the right direction,” she said.

“I hope this will pressure employers to hire more people while guaranteeing more workers their rights to enjoy life outside work.”

South Koreans have some of the longest working hours among the Organization for Economic Cooperation and Development countries. In March, the country’s Gender Equality Minister called the working hours “inhumanely long” and claimed it as one of the major causes of the country‘s alarmingly low birth rates and aging society.

Studies have shown that the country’s long working hours do not necessarily result in higher labor productivity. In 2014, South Koreans’ labor productivity was $31.90 per hour, significantly lower than the OECD average, which was $49.

“I think it’s a mixture of culture and the structure of the labor market,” said a working professional in Seoul who didn’t wish to be named.

“I’m not sure what it is like in other countries, but I feel that in Korea’s labor market, one’s attitude and social skills are more valued than actual job competency. I think many of my older colleagues, who aren’t as competent as others, show their ‘loyalty’ to the company by just staying in the office longer than necessary. Of course, this doesn’t mean that they are more productive than others at all.”

Not every Korean is pleased with the change. A survey by a local employment portal site showed that 55.2 percent of the 905 Korean workers who responded saying that they are concerned about having to work overtime anyway after the law revision — meaning more than 12 hours weekly — but won’t be eligible to receive overtime pay. Before the change, Koreans worked 52 normal hours and 16 hours of overtime, and were entitled to overtime pay for at least 16 hours a week.

“What if you prefer money or work over life?” said a 33-year-old office worker living in Seongnam. “I think those who want to work more and thereby make more money should have the right to do so. What if you can’t make your ends meet unless you work overtime? I feel like for some people in this country, this law revision is rather irresponsible.”

Still, the Labor Ministry is optimistic. “We are implementing a six-month grace period for employers to take their time to implement the changes,” said the ministry in a statement. “We have hired 200 labor supervisors to make sure the transition is as smooth as possible.”