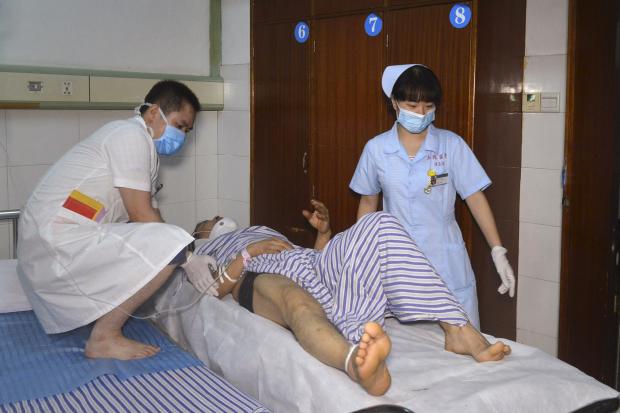 In this photo released by Xinhua News Agency, hospital workers attend to a person injured in a coach-truck collision accident in Hengdong County, central China’s Hunan Province, Saturday, June 30, 2018. Police says the death toll from the Friday, June 29, 2018 head-on collision between a passenger coach and a truck on a highway in central China has risen to more than a dozen. (Photo by XIAO YAHUI / Xinhua via AP)

BEIJING — Eighteen people were killed and 14 others injured in a head-on collision between a passenger bus and a truck on a highway in central China, police said Saturday.

The accident took place Friday evening in Hunan province south of Beijing. Video from the scene showed both heavily damaged vehicles along the rain-slicked highway. It appeared that one of the vehicles may have crossed a center divider.

Speeding, dangerous passing, poorly maintained vehicles and fatigued drivers are most often the cause of serious traffic accidents in China. Friday’s accident appeared to be one of the worst in recent months.

Despite vast improvements in safety, the World Health Organization says about 260,000 Chinese die each year in traffic accidents, many of them pedestrians, bicyclists or motorcycle riders.

Long-distance buses are a cheaper alternative to high-speed trains or planes for the vast majority of working-class Chinese traveling around the vast country.

Read Next
Melania Trump weighs migrant visits with husband’s policy
EDITORS' PICK
Duterte OKs expansion of limited in-person classes in areas under Alert Level 1, 2
Expert cites need to ‘reimmunize’ whenever there’s new concerning variant
Acer starts the year off strong with the Aspire Vero National Geographic Edition
Over 3 Million worth of prizes to be won at Smart Padala’s SENDali Manalo Promo!
The best of bayside and city living at SMDC’s Sail Residences
Over 1,700 train commuters with no proof of vax were denied rides—DOTr
MOST READ
Duterte praises military but slams police for poor discipline, corruption
DOH: Experts still studying booster for those vaccinated with Sinopharm jab
Marcos Jr. visits Cebu, stands as ‘ninong’ to mayor’s son
Duterte wants Lapulapu statue in Cebu ‘bigger and higher’ than Magellan’s
Don't miss out on the latest news and information.