Chinese group out, another in | Inquirer News
Close
menu
search

Chinese group out, another in 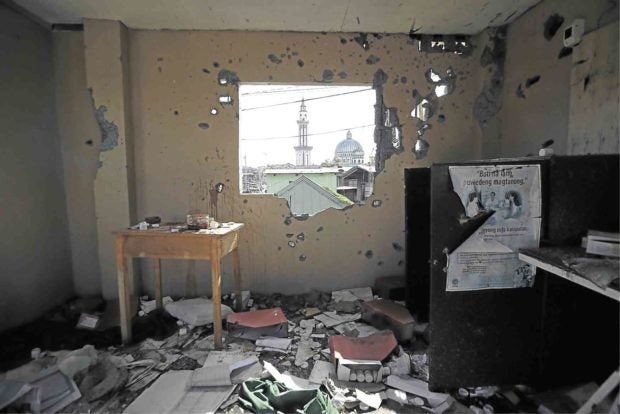 VIEW TO DESTRUCTION The Saduc Grand Mosque, the biggest mosque that reopened near the former battle area between troops and Islamic extremists, is seen through a bullet-riddled wall in Marawi City. AP

MARAWI CITY—Eight months after the end of fighting here, the main battle zone of this city has not yet been completely cleared of unexploded ordnance while the scheduled debris clearing in the area could not yet start according to schedule.

An official of Task Force Bangon Marawi (TFBM) said debris clearing in the main battle zone had faced some delays after the Chinese-led Bangon Marawi Consortium failed to meet legal and financial requirements to be the main developer of the city’s rebuilding.

Earlier, TFBM announced the debris clearing was to start this month.

Castro said the Bangon Marawi selection committee was now in negotiations with Power China, the multinational company that placed second in the bidding process.

In its timeline, TFBM said, debris clearing was supposed to have started so that horizontal and ground preparations could follow for another six months.

“The debris clearing and horizontal preparations are expected to be finished in 18 months, so if it will start this July, it will be done in December 2019,” Castro said.

But Col. Romeo Brawner Jr., deputy commander of Joint Task Force Ranao, said the military had not yet finished clearing the area of unexploded ordnances.

Castro had given assurance that the rehabilitation of the most affected area in Marawi would be Filipino-led.

If chosen as the main developer for the rebuilding, Power China would build government-approved facilities and infrastructure in collaboration with and monitoring of TFBM, the Marawi City government and the people of Marawi.

“This is to ensure that the rehabilitation will be completed in accordance to the customs, religion and tradition of the country’s only Islamic city,” Castro said.

“TFBM is working to ensure that the rehabilitation will remain on schedule,” Castro added.

Residents of the most affected areas were projected to return in 2020 after 8 million metric tons of debris were removed, roads were built, underground electric and water facilities were installed, and the central sewerage system was completed.

Between July 2018 and December 2019, TFBM may gradually allow residents in the 24 villages inside the former battleground to also rebuild their houses.

“We will let them in slowly,” Castro said.

“They cannot rebuild on their property until electric and water lines are completed. Those are all underground,” he said.

While rehabilitation plan negotiations were ongoing, several housing, social welfare, livelihood and business projects under the government’s comprehensive rehabilitation and recovery plan for 2018 would be implemented. —DIVINA SUSON