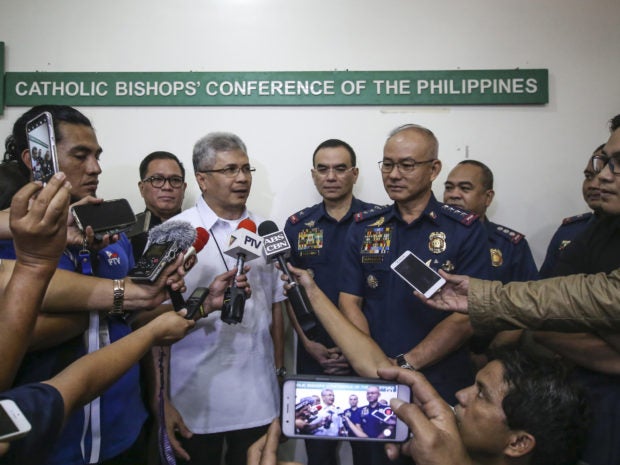 CONSULTATION MEET Bishop Reynaldo Evangelista and other members of the Catholic Bishops’ Conference of the Philippines (CBCP) meet with Philippine National Police Director General Oscar Albayalde and other PNP officials to discuss issues on human rights, the government’s war on
drugs and the recent killings of priests at the CBCP office in Intramuros, Manila, on Thursday. —EARVIN PERIAS

Catholic bishops on Thursday gave assurance that they were not trying to destabilize the government by protesting President Duterte’s diatribes against God and the Church.

The bishops were pushing back against a statement by Pastor Saycon, a member of the government’s dialogue panel with religious groups, that he was not discounting the possibility that the Catholic Church could be used to destabilize the Duterte administration.

Saycon, a member of the Edsa People Power Commission and one of the leaders of the Council of Philippine Affairs whom former President Gloria Macapagal-Arroyo called a “termite” for organizing protests against her administration, said there were “radical” members of the Catholic clergy who might be used by some organizations to undermine the government.

“There is no truth to that, definitely not true,” said Imus Bishop Reynaldo Evangelista, chair of the public affairs committee of the Catholic Bishops’ Conference of the Philippines (CBCP).

Evangelista said there was no reason for the Catholic Church to initiate destabilization moves against Mr. Duterte, who sparked public outrage by calling God “stupid” in a speech to supporters in his hometown Davao City last Friday.

“We do not want to escalate the situation. We are all for peace, we are peace-loving people,” he said.

On Thursday, Malacañang distanced itself from the statements of Saycon.

Roque said he would talk to Saycon about “standard operating procedures [in] the Office of the Spokesperson.”

“I’ll have to tell him to be more careful about what he says to the public and to the media, and that there are vetting processes before we’re able to say anything to the media,” he said.

It wasn’t clear what provoked Mr. Duterte’s ire last Friday. All of a sudden, he questioned the biblical story of the creation, blasting God for making Adam and Eve perfect only to allow them to fall into sin.

“Who is this stupid God? You created something perfect and then you think of an event that would destroy the quality of your work. How can you rationalize that God. How can you believe him. So now we’re all born with an original sin,” Mr. Duterte said.

His remarks drew condemnation from Catholics, including some of his supporters, and members of the clergy.

Sorsogon Bishop Arturo Bastes called President Duterte a “madman” and urged the faithful to pray for an end to his “blasphemous utterances and dictatorial tendencies.”

Sen. Panfilo Lacson, a former chief of the Philippine National Police, said he had not often backed President Duterte’s policies, but after the President’s attack on God, “to whom I pray every single day and with whom I’ve found solace and comfort in all my difficult times, I don’t even have to think of my choice.”

“May God forgive him and make him atone for all his sins,” Lacson said.

But President Duterte, who cursed Pope Francis during the campaign for Malacañang in 2016, went on haranguing audiences with his confusing denial of the Christian God, embrace of a god that he did not explain, and insistence on not believing at all.

“Your God is not my god because your God is stupid. Mine has a lot of common sense,” he said in a speech at Cagayan de Oro City on Monday.

“If I choose not to believe in any god, what’s the fucking thing about it? It’s a freedom to choose one,” he said.

But not really unmindful of the furor he had inspired, Mr. Duterte formed a body to talk with the Catholic hierarchy and the leaders of other religious groups to prevent the fence from completely collapsing.

At first there were Roque, Saycon and Foreign Undersecretary Ernesto Abella—a former pastor—on the dialogue panel.

On Thursday, the President appointed Cabinet Secretary Leoncio Evasco, a former Catholic priest, to the group.

But, speaking at a vice mayors’ meeting in Panglao, Bohol province, Mr. Duterte said he would never apologize, “not in a million years.”

“I’m shaking the tree,” he said, but added that he would keep quiet for now and “see how the nation reacts.”

In Manila, Roque said Evasco’s experience as a priest would be beneficial to the government panel in the dialogue with the country’s religious leaders.

The panel spoke to leaders of the Philippine Council of Evangelical Churches on Wednesday.

A dialogue with the CBCP is expected next week. — WITH REPORTS FROM JULIE M. AURELIO AND AP