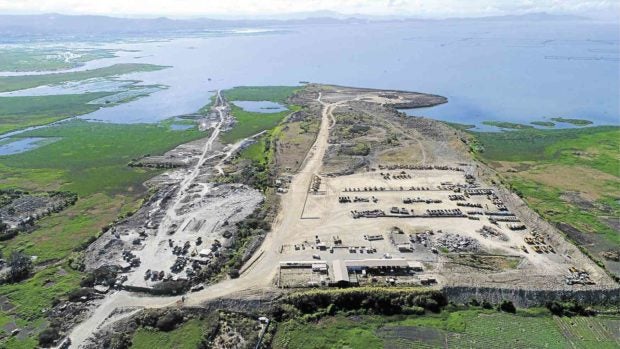 Viewed from another angle, the reclaimed land along C-6 Road in Barangay Kalsada, Taguig City. —Photos courtesy of LLDA

A garbage collection company on Thursday criticized the “Gestapo-like” takeover by the Laguna Lake Development Authority (LLDA) of its facility in Taguig City, saying the agency’s use of policemen in battle gear was an “arrogant display of firepower.”

In a statement, IPM Construction and Development Corp. also assailed as “false and malicious” the LLDA’s claims that the firm had been conducting illegal reclamation and trash dumping on the shores of Laguna de Bay in Barangay Calzada.

“Our office personnel, mechanics and daily paid workers were all terrified. They peacefully and voluntarily yielded control of the property,” it added.

On June 14, the LLDA took control of the 37-ha site occupied by IPM and the 10-ha reclaimed site of Level Up Construction and Development Corp. It also seized their heavy equipment.

In a press briefing at the site on Thursday, LLDA General Manager Jaime Medina repeated his accusation that IPM and Level Up dumped trash on the pieces of land they “illegally reclaimed.”

He was joined by Environment Secretary Roy Cimatu, who inspected the area.

IPM, which has sought a restraining order in court, denied the allegations, saying it was merely operating a materials recovery facility (MRF) and transfer station in the area.

It stressed that the LLDA takeover would not affect its trash collection operations in some cities in Metro Manila.

“We wish to assure our clients that it’s business as usual for IPM. Your garbage will be collected as scheduled. What was ordered closed by LLDA is just one of IPM’s motorpool and MRF facilities,” it said.

As a garbage collection firm, IPM said, it was legally leasing the parcel of land owned by the Ysagun family for its MRF and transfer station, and that it had secured all necessary permits from the Environmental Management Bureau and the Taguig City government.

“Hence, LLDA’s claim that we’re dumping garbage on Laguna Lake is false and malicious,” it said.

IPM has contracts with the local governments of Manila, Quezon City, Pasig, Mandaluyong, Pasay and Taguig.