newsinfo / Headlines
Headlines
‘Being poor no excuse to engage in cyberporn’

EYESORE The coastline of Barangay Puro in Legazpi City has become an eyesore as garbage carried by current from nearby waterways settle on the shore. —MARK ALVIC ESPLANA

CEBU CITY — Two years ago, Miriam (not her real name) gave birth to her second son. Without any means of income, the 22-year-old mother decided to venture into a home-based enterprise that would give her enough money to provide for her family.

“We are poor. We don’t have any other means of livelihood,” she told police on Saturday after she was arrested for allegedly exposing children to cyberpornography at Barangay Poblacion in Cordova town, Cebu province, by asking children to do live sex shows online in exchange for P3,000.

Three girls, ages 12 and 15, were rescued on Saturday during the entrapment operation conducted by the Anti-Cybercrime Group in Central Visayas and the Cebu police.

A 4-year-old girl and Miriam’s two sons, ages 2 and 5, though they were not offered during the transaction, were also taken in custody by social workers for assessment to determine if they too were sexually abused.

Investigators said they were also considering filing the same charges against Miriam’s live-in partner who might have been involved in cyberpornography.

Since the victims are minors, the offense falls under qualified trafficking, a nonbailable offense, which carries the penalty of life imprisonment and a fine of not less than P2 million.

While the law against human trafficking allows the media to identify the accused, the Inquirer withheld the name of the mother to protect the victims who include her two children.

“We received information that she had been involved in cyberpornography with the use of mobile phones. So we conducted a case buildup to validate the report,” he said.

On Saturday, an undercover policeman transacted with Miriam, who allegedly agreed to sexually exploit three minors in exchange for P3,000.

Before she could start the sexual act, operatives barged into her house and arrested her. “We didn’t have to wait for the suspect to sexually abuse the victims. Mere offering of minors is already a violation,” Dofiles said.

Cybersex is a billion-dollar global industry that proliferates with easy access on the internet.

Based on a report from the International Justice Mission (IJM), a nongovernment organization that has been actively fighting all forms of human trafficking and child exploitation, majority of customers of child pornography are in the United States, Europe, Australia, Japan and South Korea.

For a live video feed of young girls and boys, customers either pay through their credit card or via a money transfer service to cyberporn operators.

According to IJM, over 50 percent of rescued victims in the Philippines were 12 years old or younger. Some were even babies and toddlers.

Tanagho said sex predators usually pay between P1,000 and P5,000 for every “live stream” of the sexual act, hence some people were easily enticed by money without having to work hard.

He hoped cyberpornography would stop. “Let’s end online sexual exploitation of children together sooner than later,” he said. 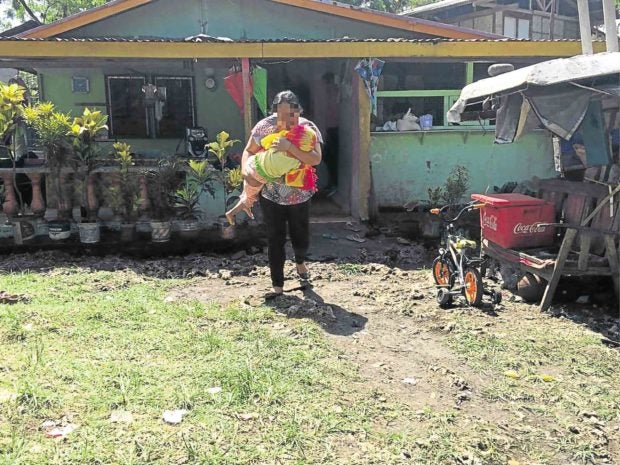 SAVING KIDS A government social worker in Cebu province rescues a child from a cyberpornography operation that is run in this house in Cordova town. —CONTRIBUTED PHOTO BY INTERNATIONAL JUSTICE MISSION

Dofiles appealed to those engaged in cyberpornography to stop their “illegal and immoral business.” “Poverty is not a reason for anyone to engage in something bad. Many poor families make a living by taking decent jobs,” he said.

“I believe those who are into this kind of job simply want easy money,” he added.

The rescued children were turned over to the custody of the Department of Social Welfare and Development where they would receive psychosocial interventions, including therapy and rehabilitation.

IJM supported Philippine law enforcement agencies in operations that led to the arrest of more than 100 cyberporn suspects and the rescue of more than 300 victims.

At least 35 people had been convicted for trafficking children into online sexual exploitation.