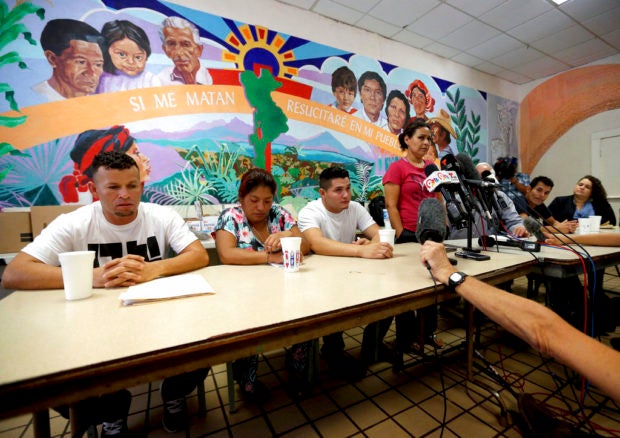 (From left) Mario, Miriam and Christian listen as Iris recounts her separation from her child at the border during a news conference at the Annunciation House on June 25, 2018, in El Paso, Texas. AP

EL PASO, Texas  — They came from Honduras, Guatemala and El Salvador, with children in tow. Some were fleeing violence. Others were looking for a better life.
They didn’t know they would be separated from their children after crossing the US-Mexico border due to a zero-tolerance policy that called for prosecuting every adult who entered the country illegally.

Five parents out of a group of more than 30 who were recently released from federal custody pending the outcome of their immigration and asylum cases shared their stories Monday during a news conference in El Paso. They have found temporary shelter with a Texas charity organization, with their locations tracked by ankle monitors.
Some have no idea where their children are. Others do but can’t say with any certainty when they might see them again. Their children range in age from 4 to 17.

One father said he felt broken without his teenage son, while another cried over his daughter. A mother wiped away tears, fearing that her 4-year-old son believes she abandoned him.

They are just a few of the many families who have been thrust into the center of a long simmering debate over how to handle the flood of migrants on the southern border. The five immigrants spoke on the condition that their last names not be used for fear of deportation by US authorities.

IRIS
Detained on June 15, she and her 6-year-old son clung to each other after learning they would be separated and that she was being sent to jail.

The 40-year-old single mother from Honduras asked that they be deported together immediately. She was told it was too late. She let go and persuaded her son to do the same after officials said they would be separated — one way or another.

Iris learned her son is somewhere in Arizona after a social worker contacted a relative. Most of the 32 recently released parents are likely to leave El Paso as they obtain more information and seek out their children.

“I go to sleep at night, and the first thing I do is dream of my son,” she said.

MIRIAM
Her 4-year-old son was asleep as immigration agents insisted on separating the two of them in the early morning before dawn.

“If I had known, I never would have come” to the United States, she said.

The Guatemalan mother said she was led to believe when arrested that her son would be returned to her, wherever she was held. She described the boy as tiny and shy.
She located him at a holding facility in New York. When she asked a social worker to speak with him, she was told the boy was angry and would not talk.

“He thinks you abandoned him,” she was told.

CHRISTIAN
After traveling 17 days from Honduras to reach the US border, he was arrested for crossing illegally.

“They said I had violated the laws of the United States,” said the 23-year-old farmhand. “I said, yes, I accept that, but could they take me away with my daughter.”
He broke down while recounting that his 5-year-old daughter was more afraid for him, knowing that he was going to jail.

Christian spoke to his daughter a week ago, when an official with the local sheriff’s office intervened to find her at a holding facility in Chicago.

MELVIN
The Honduran immigrant and his 17-year-old son were turned away from a port of entry at El Paso while seeking asylum.

The two opted out of desperation to cross illegally, wandering through a drying concrete culvert along the border as night approached. They feared rumors of migrants being taken and held for ransom by gangs in Ciudad Juarez, Mexico.

They were arrested by US authorities and separated soon after, exchanging a simple goodbye. Melvin said he doesn’t know where his son is being held.

MARIO
The 32-year-old Honduran father spoke of the pain of being separated from his 10-year-old daughter and only child as her birthday came and went Monday, without knowing where she was being held.

He was detained May 25 at a fence that marks the US-Mexico border.

He said authorities provided a phone number to seek information about the whereabouts of his daughter but there has been no answer.

“Since they took my daughter, I haven’t heard anything,” he said, noting that an attorney was assisting him.