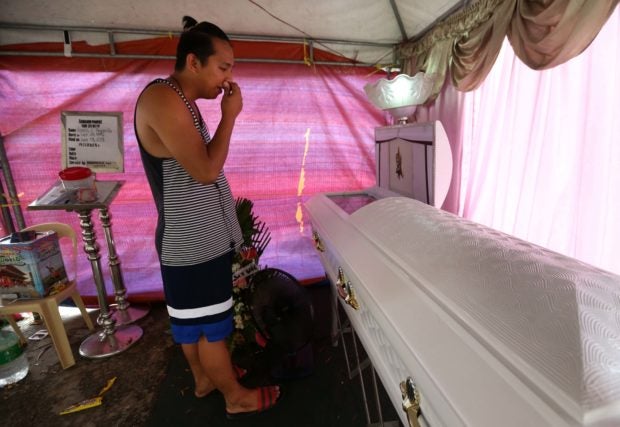 A cousin of Genesis “Tisoy” Argoncillo weeps as he views the remains of the 22-year-old Novaliches resident who was arrested for going shirtless in public on June 15 and mauled to death four days later while in police detention. INQUIRER file photo / LYN RILLON

The House Makabayan opposition bloc has filed a resolution which seeks to conduct an investigation into the death of 22-year-old Genesis “Tisoy” Argoncillo due to alleged beatings while in the custody of the Novaliches Police Station 4 in Quezon City.

Tinio also chided the lower chamber for not acting on their resolutions on human rights violations under the Duterte administration.

For his part, Zarate said he hopes Argoncillo’s death would be the beginning of the crusade toward achieving justice for all human-rights victims.

On Monday, the group also filed a resolution seeking an investigation into the Philippine National Police’s (PNP) alleged “illegal arrest” of over 7,000 “tambays” (loiterers).

The progressive lawmakers cited that Argoncillo was arrested by police on June 15 in front of a store “just less than 10 steps away from his home” because he was not wearing a shirt.

According to Esquivel, Argoncillo complained of shortness of breath on June 19 and was rushed to the nearby Novaliches District Hospital for medical attention. Esquivel also faulted QCPD’s “heavily congested” custodial facility for the recent deaths of five persons under custody (PCUs) who died inside different custodial facilities of QCPD.

He also clarified that Argoncillo was arrested for alarm and scandal, and not by virtue of any City Ordinances or the police’s “Anti-Tambay sa Kalye” operation.

READ: QCPD chief says death of detainee not due to police brutality

“Kung meron mang pagkakamali on the side of the police, lagi namang may corresponding investigation and sanction after the result of the investigation,” he told reporters.

In a speech last June 13, President Rodrigo Duterte directed authorities to be strict with tambays, saying they are “potential trouble for the public.”

(We built the streets and highways for the law-abiding citizens. The criminals and the druggies are not supposed to be there. So my directive is when you see a loiterer, tell them, “Go home. If you don’t go home, I will bring you to the office—in Pasig.”)

“Do not… You be strict. Part of confronting people who do not do nothing and just idling around, they are potential trouble for the public,” he added.

Following this statement by the President, the PNP has launched its crackdown against tambays who violated ordinances, such as drinking, smoking or urinating in public places; illegal peddling; littering; breaching peace and order; and concealing deadly weapons, among others. /jpv

RELATED STORY: Solon on Duterte’s directive vs ‘tambays’: Is this martial law redux?