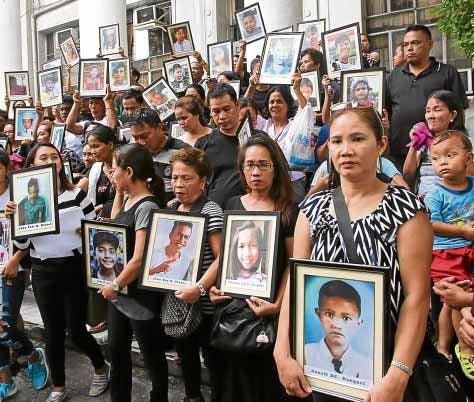 PAO CAUSE Relatives of children whose deaths were being linked to Dengvaxia were brought to the DOJ by PAO during Monday’s hearing on the criminal case filed against former and incumbent health officials. –JOAN BONDOC

Former Health Secretary Janette Garin and at least 40 other health and pharmaceutical officials appeared before the Department of Justice (DOJ) on Monday to answer a criminal case blaming them for the deaths of children who had been given the controversial Dengvaxia dengue vaccine.
Garin and the other respondents asked the DOJ to dismiss the case for “lack of merit.”

The case was just one of at least nine that Garin and the other respondents were facing.

The Public Attorney’s Office (PAO) said it would file a 10th criminal complaint against Garin and the others for the death of 14-year-old Naomi Nimura, a Pasay City resident, in November last year after the teenager had been given Dengvaxia, too.
Nimura was among at least 830,000 students and government employees given the vaccine in 2016.

Duque, who was included as a respondent in two of the nine complaints, did not attend the hearing since he had already subscribed to his sworn statement before a public prosecutor.

In her counteraffidavit, Garin denied there was “undue haste” in the DOH’s P3.5 billion mass dengue immunization program which was carried out in April 2016, or a month before the presidential elections.

The DOH suspended the vaccination program in December 2017 after manufacturer Sanofi Pasteur admitted in November that year that Dengvaxia was risky for those with no prior dengue infection.
Garin said the mass vaccination program was “backed up with studies that date back to several years.”

On PAO’s accusation that she “maliciously and arbitrarily” failed to inform the public of Dengvaxia’s risks, Garin claimed these were just “theoretical” that have not yet been supported by data at the time the vaccination program was launched.

“In fact, there were students whose immunization was deferred because of existing conditions, like fever,” Garin said.

Garin added that PAO had failed to support with scientific evidence its conclusion linking Dengvaxia to the deaths of the nine children.

“The bare claim that deaths or injury are caused by Dengvaxia without competent medical or scientific proof cannot establish the existence of probable cause,” she said.

Read Next
Oil firms slash P1 per liter off fuel prices
EDITORS' PICK
House energy committee chair Arroyo bats for cheap electricity
Why Tagle is a leading papal contender
KWF has no power to ban, censor written works – Lagman
Powered by style, innovation and passion
A laptop that maximizes your WiFi so you can maximize your productivity
In Borongan, nuns play hoops (not mahjong)
MOST READ
Why Tagle is a leading papal contender
Zubiri on SRA mess: Shameful, disgusting
SRA officials should resign after ‘illegal sugar order’ – Zubiri
Arjo Atayde reveals proposal to Maine Mendoza was ‘more than a year’ in the making
Don't miss out on the latest news and information.