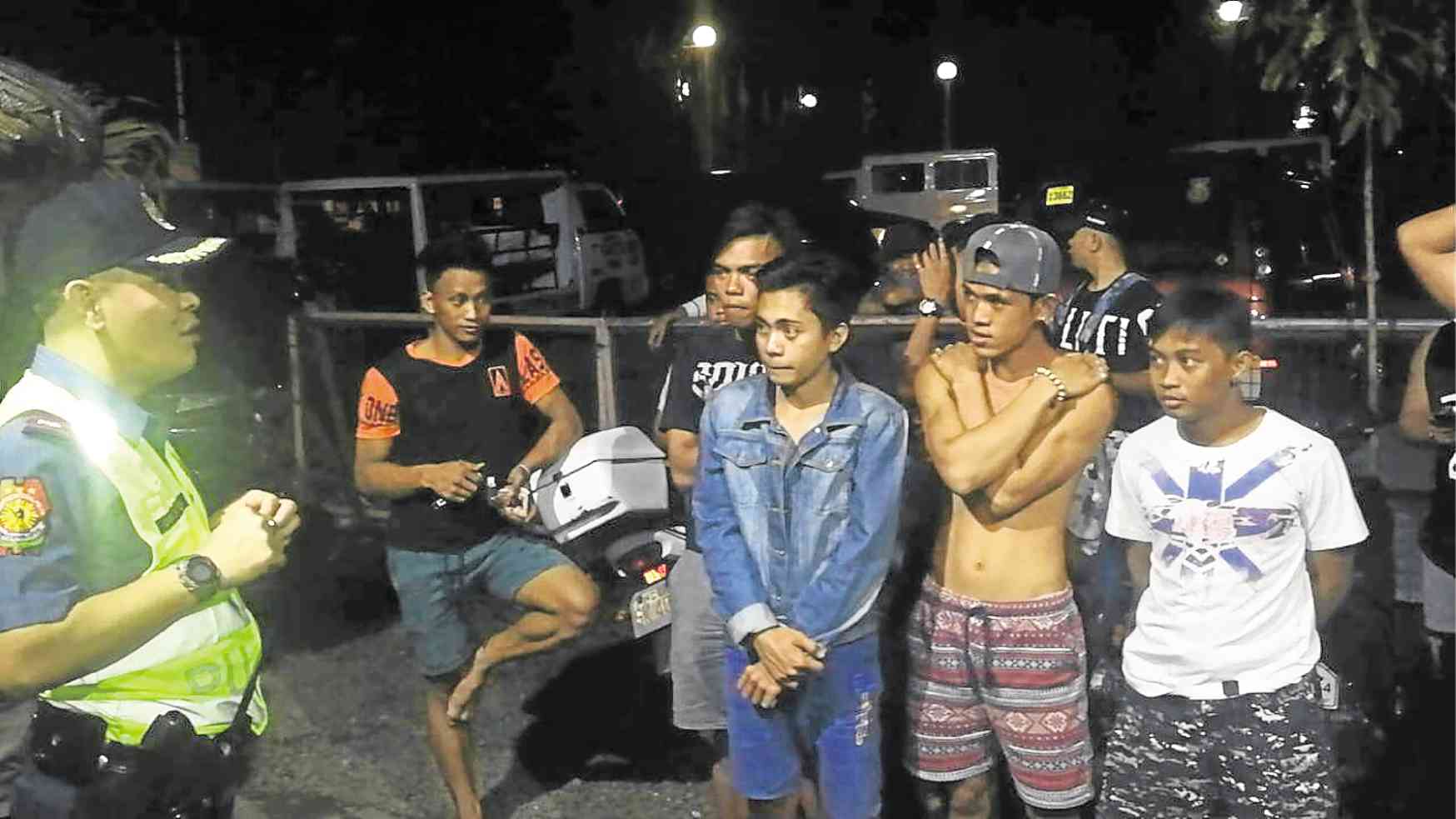 CRIME PREVENTION A policeman talks to a group of “tambay” (loiterers) in Cavite province as the police enforce local ordinances on curfew, drinking in public, loitering and illegal gambling to prevent crime. —PHOTO BY CAVITE PNP

The Duterte administration’s antiloitering campaign to curb crimes, called “Oplan Tambay,” has been hailed and assailed as police have reported “accosting” close to 700 people in the Visayas since last week.

In Bulacan province, 460 residents were sent to police stations as the law enforcers implemented a program called “Oplan Rody” (for Rid Our Streets of Drunkards and Youths) in 14 towns from June 19 to June 21.

In Tacloban and Cebu cities, police rounded up 625 people, most of them youngsters, who were found loitering late at night.

Whether called Tambay or Rody, the campaign had been proving to be successful as police noted a decline in street crimes, at least in Tacloban City, according to Chief Insp. Rex Cantillep, deputy chief of the city police’s operations division.

“We are not taking anyone into custody because doing so would mean arrest. We respect human rights and we give importance to it,” Cantillep said.

When the police implemented the campaign, they just asked people caught loitering to go home, and if minors were involved, they escorted them to their houses and reminded their parents of their obligations, he said.

But the campaign has been described by some sectors as another human rights violation being committed by the administration and as “a prelude to implementation of martial rule.”

Lawyer Arvin Odron, director of the Commission on Human Rights (CHR) in Central Visayas, said the agency asked the police to suspend the implementation of the program against “tambay” (loiterers) in the absence of clear guidelines.

He asked people to “aggressively oppose” the campaign “as it would lead to worsening abuses by government forces.”

Odron said: “The CHR wants to know what constitutes ‘tambay’ because giving the law enforcement [department] the discretion to interpret it without defining it on the guidelines is very dangerous and prone to abuse,” he said.

The police in Cebu City said they were preparing an operational plan to implement Oplan Tambay.

The program, implemented in Metro Manila last week, may be launched in Cebu province this week.

In Mandaue City, Chief Insp. Mercy Villaro, spokesperson for the city police, said the crackdown against loiterers at night would help address the problem of violence involving fraternities in the city.

“We hope this program will also lessen victims of physical injuries and vehicular accidents, most of whom were drunk persons,” she said.

“Respect for human rights is always paramount. We invite the CHR to accompany us during the implementation of the Oplan Tambay to make sure police are doing things within our mandate,” he said.

Those who would be rounded up, he said, would undergo profiling by the police to find out if they had existing arrest warrants.

The police would also coordinate with the Department of Social Welfare and Development to help find shelters for street dwellers. —REPORTS FROM ADOR VINCENT MAYOL, JOEY GABIETA, CARMELA REYES-ESTROPE AND ALLAN NAWAL