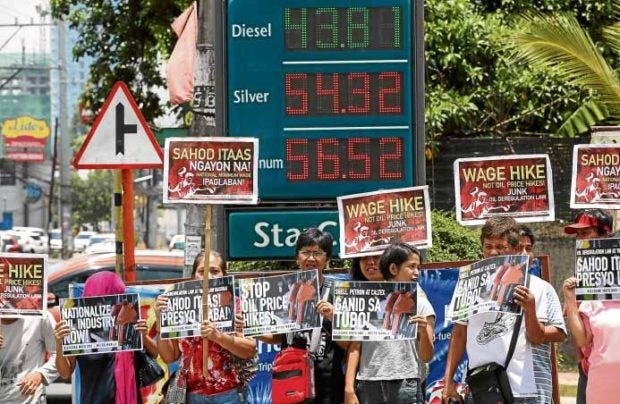 HIGHER PAY Members of Kilusang Mayo Uno, amilitant labor center, call for higher minimum
wages and a stop to oil price increases during a protest rally at a gas station in Quezon City in this
photo taken on May 21. —NIÑO JESUS ORBETA

Labor groups on Thursday denounced Trade Secretary Ramon Lopez for saying that any wage increase should be “minimal” to avoid increasing production costs and consumer prices.

“The country’s wage rates are so small and inadequate that it needs a significant increase in the light of extraordinary inflation caused by the inutile leadership of Trade Secretary Ramon Lopez to arrest profiteers and control prices of commodities combined with the inflation as a result of excise tax on fuel by the (tax reform) law, increase in the prices of oil in the world market and the felt depreciation of the value of peso against the US dollar,” Tanjusay said in a statement.

The highest monthly gross pay of P12,300, which minimum wage workers in Metro Manila receive, is “way below” the P42,000 that the National Economic and Development Authority had stated was needed by a typical Filipino family to live decently, Tanjusay added.

Lopez told a briefing in Malacañang on Wednesday that he was not in favor of a nationwide wage increase because this would be “dangerous.”

“If we increase wages, this will increase costs and this might trigger rise in prices of goods, and it will not only be the wage earners but the whole population that will be affected. So those who did not benefit from the wage hike will also get affected,” he said.

“So if you ask me, there could be minimal adjustment. But that should not be more than what is necessary—because you will really create a strong pressure on inflation,” he added.

Tanjusay said that if employers refused to raise wages, the workers and their families would become more impoverished and vulnerable to unlawful and immoral means to survive.

Tanjusay said any major wage increase would be spent “to purchase basic commodities, pay loans, pay for siblings’ matriculation, and remitted to parents in rural provinces benefiting businesses and job opportunities in the process.”

Julius Cainglet of the Federation of Free Workers (FFW) said Lopez was clearly not standing for workers and their families.

“His heart only beats for employers,” Cainglet said.

The administration should make amends for failing to end contractualization and implementing the Tax Reform for Acceleration and Inclusion (TRAIN) Act by granting a significant wage hike, he said.

Kilusang Mayo Uno’s Elmer Labog said Lopez was lying because prices had been increasing even without any wage hikes.

“On the contrary,” Labog said, “increasing the workers’ purchasing capacity would make the economy more vibrant as they could buy more goods and services. DTI and the Duterte government should stop treating the Filipino workers like slaves.”

“It says much about how insensitive this administration is when it comes to increasing workers’ pay in order to provide them relief amid rising cost of living,” Magtubo said.

Asked to clarify what he meant by a “minimal” wage increase, Lopez said the regional boards should be left to decide what “reasonable position” to take.

“They [the regional boards] consider and decide on what’s the balance between the plight and needs of the workers and those of the business to make the operations still viable and without affecting jobs generation,” he told the Inquirer.

Under the Wage Rationalization Act, regional boards determine and fix minimum wage rates applicable in their respective regions. Each board is composed of representatives from the government, labor sector and management.

The Philippine Chamber of Commerce and Industry (PCCI), the largest business group in the country, said it would only back a minimal wage increase.

PCCI chair George Barcelon declined to give a range of wage rates that businessmen would be comfortable with, noting that it was difficult to set it “arbitrarily.”

Barcelon said his group was “OK” with a small wage hike, as long as its effects on the economy had been considered.

The American Chamber of Commerce of the Philippines (AmCham) also deferred to regional boards to make the decision on any wage hikes.

“The regional boards are a good system for bringing together representatives of employers, workers and government. It has been approving increases for some years that reflect inflation yet keep the Philippines competitive with most large [economies in the Association of Southeast Asian Nations],” AmCham senior adviser John Forbes told the Inquirer.