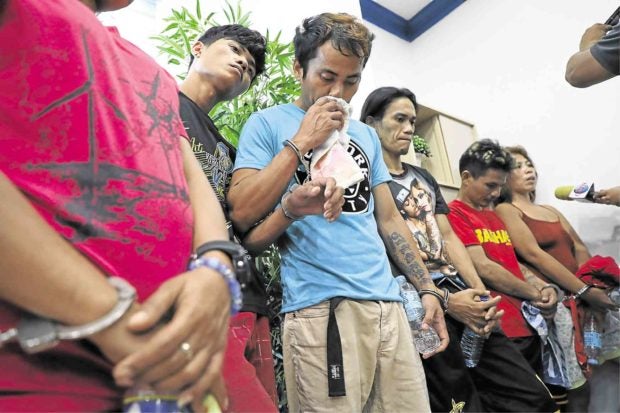 DRUG RAID While policemen in Cebu province continue arresting suspected drug pushers and users, like this group nabbed during a raid in Talisay City, several law enforcers have also been found to be involved in the illegal drug trade. TONEE DESPOJO/CEBU DAILY NEWS

CEBU CITY — In a span of 10 days this month, three policemen whose names either appeared on the government’s “narcolist” or were linked to the illegal drug trade, were gunned down in Cebu province.

Although the killings came days after President Duterte announced the involvement of “a lot of Cebu policemen” in illegal drugs, the regional police director in Central Visayas denied that the killings were part of an internal cleansing within the Philippine National Police.

“We will try to observe what the motives are and we will try to connect them later on. But definitely, the police have nothing to do with [two of these three cases],” Chief Supt. Debold Sinas, regional police director, said on Wednesday.

The latest victim, PO2 Melchizedeck Batomalaque, just stepped out of his house at Barangay Daanlungsod in Toledo City, about 50 kilometers west of Cebu City, past 6 p.m. on Tuesday when gunmen on board a motorcycle drove by and shot him several times. The 37-year-old policeman was hit in his head and body, and died while being taken to a local hospital.

On June 10, Senior Insp. Raymond Hortezuela, a Cebuano policeman assigned to the Negros Oriental provincial police office, was shot and killed by fellow policemen after he allegedly resisted arrest during a drug bust arranged by lawmen at Barangay Tipolo in Mandaue City.

Hortezuela’s death came three days after the President, who spoke during the inauguration of the Mactan-Cebu International Airport Terminal 2, described Cebu as “poor” because of illegal drugs.

President Duterte said the narcotics problem in Cebu was “severe” because several policemen were involved in the illicit trade. “As I’ve said, one day I will take action against all of you,” he said.

Tilos, a member of the Ginatilan police station, was not on the narcolist but he had been accused of being a drug protector.

But Sinas described the separate attacks on the three policemen as “isolated.”

“They are definitely not related,” he said. Batomalaque had been assigned to different police stations in Cebu before his transfer to the Autonomous Region in Muslim Mindanao in 2016 because of his involvement in illegal drugs, Sinas said.

In Iloilo province, President Duterte on Wednesday warned mayors involved in the illegal drug trade not to kill policemen who refused to join them.

“For the mayors, if you are into drugs, you better shape up. Do not kill policemen who refuse to join your racket … If the government is your enemy, you will end up dead,” the President said.

“Do not destroy our children because I will really kill you,” he said.

President Duterte, in two events that he graced in Iloilo, also spoke against former Iloilo City Mayor Jed Patrick Mabilog whom he earlier accused of being a drug protector. Mabilog, who had repeatedly denied involvement in illegal drugs, left the country last year.  — WITH A REPORT FROM CHRISTINE O. AVENDAÑO