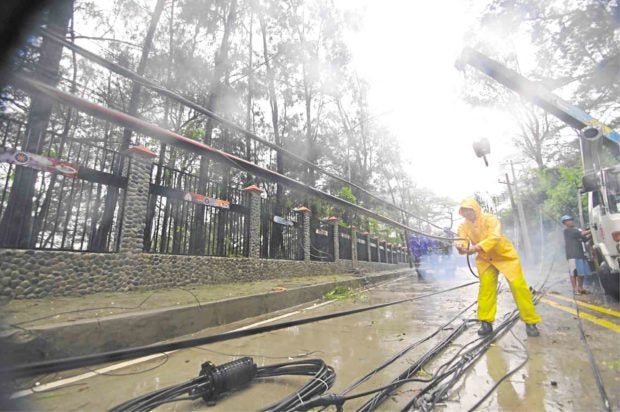 RESTORING POWER In this 2012 photo, workers of an electric cooperative check power lines that snapped when a storm hit Baguio City. —RICHARD BALONGLONG

LA TRINIDAD, Benguet — The operator of the Luzon grid has been charging consumers for typhoon damage, in a country visited by an average of 20 storms a year, Benguet officials said on Monday.

The Benguet Provincial Board is now challenging a new petition filed by the National Grid Corporation of the Philippines (NGCP) with government regulators to recover from consumers the P327.5 million it spent to repair poles and steel towers damaged when Typhoon “Nina” struck Luzon in December 2016.

The Energy Regulatory Commission had allowed NGCP in the past to make consumers pay for the P124 million it spent to repair infrastructure damaged by Typhoons “Ondoy” and “Pepeng” in 2009. NGCP collected additional charges from 2013 to 2015.

NGCP is asserting the government rules for setting distribution wheeling rates, which allow power distributors to charge their customers additional “force majeure pass-through” expenses when their assets are damaged by natural calamities.

Force majeure is a clause used in contracts in cases where unforeseen and uncontrollable events affect the performance of an arrangement.

The NGCP petition seeks to require customers in Luzon to pay an additional 16 centavos for every kilowatt hour of electricity consumed in 2018 and 2019, and another 17 centavos per kilowatt hour for 2020 or until the amount is fully recovered.

“We only came to know about this force majeure charge now, and it is a very one-sided arrangement that benefits only the private company,” said Board Member Nestor Fongwan Jr., who earlier sponsored a resolution seeking an explanation from NGCP.

“Imagine an ice cream retailer cannot recover his losses but will have to pay for NGCP’s pass-through charges? That is unfair,” Canuto said.

The Benguet Electric Cooperative (Beneco) serving the province is also entitled to claim force majeure pass-through expenses but has not applied for increases, Fongwan said.

Board Member Juan Nazaro said NGCP should have allocated annual funds to cover typhoon damage, instead of making its customers shoulder the cost.