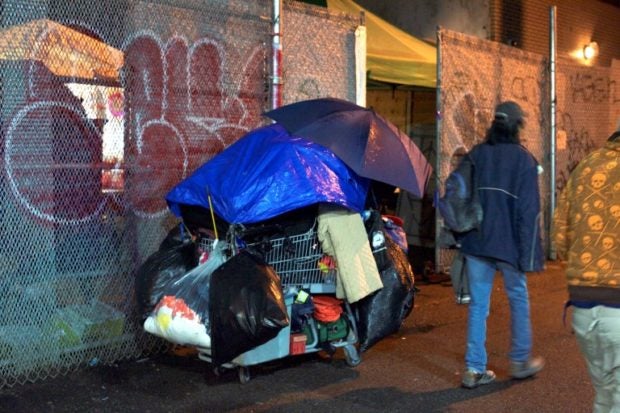 A drug user parked a cart laden with his personal belongings outside a drug-use site run by volunteers in Vancouver’s Downtown East Side. The volunteers administer naloxone, which counters the effect of most opioids. A fentanyl overdose crisis is killing hundreds in Canada, which saw nearly 4,000 opioid deaths in 2017. AFP

The death toll was 34 percent higher than the previous year, with most of the fatal overdoses involving men aged 30 to 39 who obtained fentanyl illegally from narcotics traffickers on the street.

Almost 90 percent of the 3,987 deaths in 2017 were concentrated in just three provinces: Alberta, British Columbia and Ontario.

“Canada continues to experience a serious and growing opioid crisis,” the public health agency said in a report.

“As minister, I am calling on industry to act now and stop their marketing activities associated with these products in Canada,” she said.

The health ministry explained that while prescription opioids “can help Canadians who need them to manage pain,” marketing the drugs can unduly influence doctors and lead to “over-prescription.”

According to public health agency figures, opioid prescriptions actually fell last year for the first time since 2012, to 21.3 million.

In response to the crisis, Ottawa has poured tens of millions of dollars into strengthening emergency services and distributing the overdose antidote naloxone. /cbb