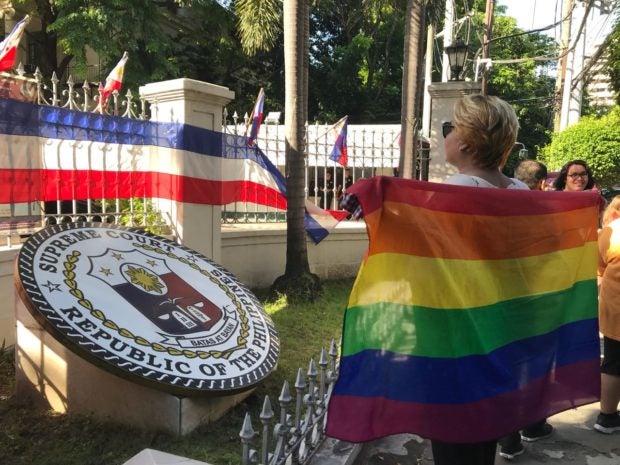 The LGBT community and advocates gather at the Supreme Court as the high tribunal hold its oral arguments on the petition for marriage equality. INQUIRER.NET/RYAN LEAGOGO

The lesbian, gay, bisexual and transgender (LGBT) community may lose a very interesting case for “aggressively” taking the case to the Supreme Court “without a careful preparation,” a Supreme Court Associate Justice said Tuesday.

The high court conducted oral arguments on a petition that seeks recognition for same-sex marriage on Tuesday. But Associate Justices Lucas Bersamin and Francis Jardeleza did not mince words on the possibility of dismissing the petition filed by Atty. Jesus Nicardo Falcis III.

Falcis, who described himself as openly gay, filed the controversial petitio to abolish the prohibition under the Family Code and allow same-sex marriages in the Philippines. His co-petitioners include male couple Crescencio Agbayani and Marlon Felipe, and a certain Sugar Ibanez and her partner.

Both Bersamin and Jardeleza said Falcis should have followed the hierarchy of courts by raising the issue first before the regional trial court.

“I think you are in great peril that your case will be dismissed,” Jardeleza told Falcis during the oral arguments.

“I will be candid to you that at this point in time, I am more inclined to dismiss your case,” Jardeleza added.

Associate Justice Estela Perlas-Bernabe also questioned the propriety and necessity of the petition, saying that Falcis did not claim that his individual right was violated by the prohibition on same sex marriage.

Falcis admitted that he did not even attempt to apply for a marriage license from the Civil Registrar’s Office.

Bersamin said since Falcis did not even attempt to apply for a marriage license, then no rights have been violated.

“You have a very strong argument but you have no case. That is my point,” Bersamin said adding that the question on whether to allow same sex marriage or not is a good question “but not a question we want to settle for you as of this time.”

Acting Chief Justice Antonio Carpio adjourned the proceedings and set the next oral arguments on June 26 at 2 p.m. He directed Falcis and Solicitor General Jose Calida to return.

The petitioners argued that the limitations imposed by the almost three-decade-old Family Code favoring only opposite-sex marriages effectively repealed the 1949 Civil Code, which never made such a distinction. /ee