AWAY FROM HARM Residents of Tubaran town in Lanao del Sur province seek shelter in a school building as soldiers pursue remnants of the Maute group in their communities. —CONTRIBUTED PHOTO

ILIGAN CITY — More than 1,500 families have fled their villages in three towns in Lanao del Sur province, as the military continues to pounce on suspected remnants of the Maute group operating in these areas, military reports said.

Suscano said clashes with the group, led by Owayda Benito Marohombsar or Abu Dar, had been reported since Sunday.

The fresh evacuation took place as the province reeled from the impact of the five-month war between government forces and Islamic State (IS) supporters in Marawi City last year.

Military reports said top leaders of the Maute group, among them brothers Omarkhayyam and Abdullah Maute, were killed in military operations but Abu Dar and some of his men escaped during the siege.

Col. Romeo Bawner Jr., deputy commander of the Joint Task Force Ranao based in Marawi, confirmed that the operations against 40 gunmen led by Abu Dar were being conducted in the borders of Tubaran, Binidayan and Pagayawan.

He said they received reports that five gunmen had been killed but these were still being verified. No government soldier was wounded or killed, he said.

Brawner said soldiers were also verifying reports on the beheading of a village chief and the arrest by Maute gunmen of an Arabic teacher.

He said the military had secured and had extended assistance to people displaced by the operations.

“No media organization or relief operations from the provincial government are allowed in the meantime while the military operations are going on,” he said.

Brawner said the military was restricting access to the affected areas to prevent civilians from being targeted by “IS terrorists.”

He said the Moro Islamic Liberation Front in the area, however, was allowed to provide help, such as the gathering of “highly relevant” information on the movement of the Maute gunmen.

Classes have been suspended in the three towns and some school buildings are occupied by evacuees, he said. 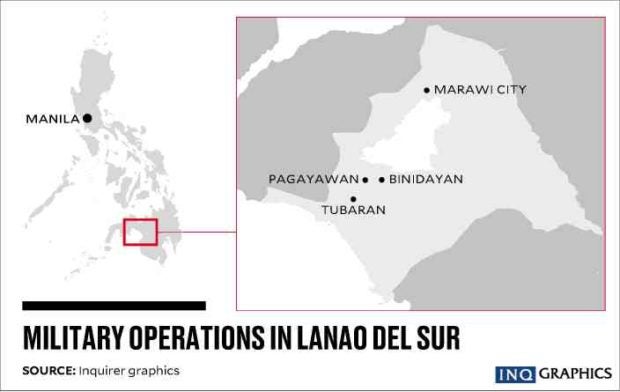 “The firefight in Tubaran on June 17 is part of the fulfillment of the promise of the AFP (Armed Forces of the Philippines) to go after the remnants of the Maute-IS group. This was the result of monthslong intelligence operations, as well as the cooperation of the local government and citizens,” Brawner said.

Tamano said the evacuations started as early as Friday in some areas when the military conducted airstrikes and artillery fire.

Adiong, in a statement, asked the people of the three towns to “remain calm and alert, and to pray for everyone’s safety.”

According to Brawner, the public should stay calm as the 103rd Infantry Brigade “is making sure that the hostilities will not extend beyond the mountainous areas of Tubaran and Pagayawan.”

In Manila, presidential spokesperson Harry Roque assured that the renewed fighting was not a cause of concern.

“This should not be a reason for worry because their forces are few and because of the martial law being implemented there, the enemy will have difficulty in having tangible gains,” he said.

According to Roque, the renewed firefight is proof that the government still has enemies in Mindanao, which has been placed under martial law until the end of this year.

The military said the group’s presence would not lead to another siege similar to what happened in Marawi.

“Your armed forces is confident that if ever they will be able to launch a kind of Marawi [siege], it will take years. They have suffered an enormous defeat in Marawi. We have not just destroyed their organization, but also their logistics,” said Col. Edgard Arevalo, AFP spokesperson, in a press conference at Camp Aguinaldo, Quezon City on Monday.

“We have been able to round up their leaders, that’s why the [group’s members] have to scamper to different areas now in order to survive,” Arevalo said. —Reports from Richel Umel, Divina Suson, Leah Agonoy, Julie Aurelio, Jaymee Gamil and the wires