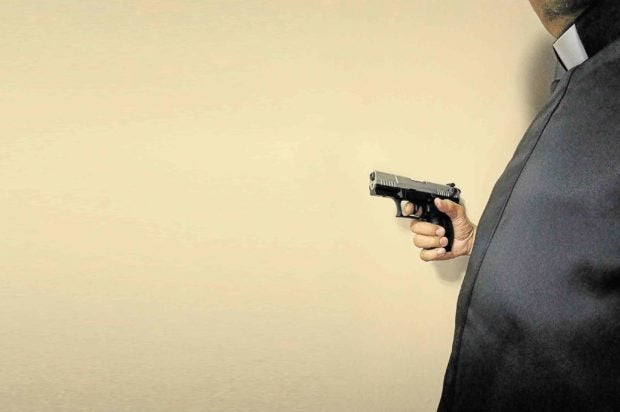 GUN-WIELDING FATHER A priest in a black clergy shirt shows the Walther PPQ .22-caliber pistol he had acquired for self-defense following the brutal killings of three priests since December. —CONTRIBUTED PHOTO

CALAMBA CITY — Some priests in Laguna are secretly acquiring firearms for protection against would-be assassins following the cold-blooded killings of three clergymen and the frustrated murder of a fourth in a span of just six months.

“And the PNP (Philippine National Police) leadership saying ‘there is no cause for alarm’ is in itself more alarming,” one of them said, referring to a recent statement by PNP Director General Oscar Albayalde.

The priests spoke on condition of anonymity for security reasons.

On Friday, thousands of mourners joined the funeral march for Fr. Richmond Nilo, 44, who was gunned down as he prepared for a Mass on June 10 in Zaragoza town, in Nueva Ecija province — the third priest killed since December.

Just days before Nilo’s killing, Fr. Rey Urmeneta, 64, a former police chaplain, was shot and wounded in this city.

One priest who is availing himself of a .45-caliber pistol is encouraging other clergymen to secure firearms for self-defense legally.

Another priest said he was “OK” with owning a .45-caliber or a 9mm pistol “just in case.”

A third priest was considering a gun of a higher caliber because, in his view, a .22-caliber pistol was only good for hunting birds and small animals.

“Any criminal will just laugh it off,” he said.

“If priest-killers can brazenly carry and use their illegal firearms to kill men of God, why can the priests not carry their legal firearms to defend themselves?” Dela Rosa told the Inquirer in a text message.

“Self-preservation is not only political or constitutional but likewise a divine right of every human being,” Dela Rosa said. “Otherwise, the good and not the bad people will all be liquidated.”

Other parishioners here also backed the idea. “It’s OK to give firearms to priests to fight against the minions of Satan and brazen killers,” said Ronald Calinga, a parish leader.

The priest would then have “a fighting chance against would-be criminals if their lives were in danger,” Calinga added.

Albayalde told reporters earlier this week that priests could arm themselves for self-protection as long as they acquired guns and permits legally and learned how to handle weapons correctly.

“There will be a feeling of added security on their part if they have firearms, legally licensed (guns),” he said.

Fr. Jerome Secillano, executive secretary of the public affairs office of the Catholic Bishops’ Conference of the Philippines said the church hierarchy is against the arming of priests, but “we can’t blame them” if they believed it was the only way to protect themselves from unknown assailants.

He said bishops may not sanction priests who arm themselves.

“We’re talking about life here—being in danger. If he sees that arming himself is the way to do it, let’s respect him,” Secillano said.

However, he said there was a “great possibility” that priests who would “pull the trigger first” in case of an attack would “contribute to the violence that is happening.”

One suspect in Nilo’s killing, who is also a suspected hired gun and drug offender, has been arrested, but police said he has been refusing to talk about the attack.

The police have five other suspects who are still at large.

The police were looking into possible motives for Nilo’s killing—his support for farmers in a land dispute and rape victims, and his staunch criticism of Iglesia ni Cristo. —With reports from Jovic Yee and Jeannette I. Andrade